rotircseu – v. to use a toilet in a bathroom as a legit chair everyday for like office work because your life is so much of a mess you don’t bother buying a chair for your use.  It’s not that you can’t afford it, its just that you don’t give a damn

ipudisteie – v. to eat dinner while on the toilet

exigentea – v. to remove a generic brand tea from the selection you offer to your guests.

Ex. Make sure you exigentea what we offer to John and Carol.

cimtwo – n. a word that was created by using a word search puzzle’s random arrangement of letters

Ex. This word search has plenty of cimtwos that will one day be defined.

kesklmya – v. to constantly berate someone into brushing their teeth without giving them the opportunity to make the decision for themselves first to do so

Claims are tricky things. At one end of the spectrum, a confident boast can garner the attention of the masses. Big and bold claims are usually preceded with both naysayers and hype-builders in equal measures, but the important part is that it gets people talking. At the other end, claims can also serve as the minimal measure by which something is then graded. A product or person loses a degree of novelty when they merely match their claim and it usually only results in a passing grade no matter how impressive the feat. The whole act is lacking the element of surprise and played down in foresight. Worst yet, if the claimed isn’t reached, the following disappointment makes it look much worse. This is usually why it pays to be careful when making a claim and why humble beginnings are often times best. With that in mind, prepare yourself for the best damn video game review to ever grace the eyes and minds of mankind.

Taking a break from my usual types of reviews, I’m going to examine the claims made by the game Mighty Crew and see how they stack up to the finished product. Mighty Crew is a free-to-play offering by the folks at AminiLab for both your iOS and Android devices. Though don’t let that sidetrack you, I still plan to give all two of my loyal fans a high quality review (Hi Mom!). A review score and my usual half-assed critical approach will follow.

No, not at all. Mighy Crew may be a lot of things but comparing it to “the Mario” seems like a misstep.  The game doesn’t even have a reliable jump mechanic and most of the game happens on a single platform, making it neither a Mario game or much of a Platformer in general. I’m also sure that “cap-a-pie” isn’t actually a word no matter what google or Merriam-Webster has to say about it. The game doesn’t even have a serious subplot where the protagonist hides his drug addiction behind cute item names: “Super Mushroom,” “Fire flower.” Yeah, right. 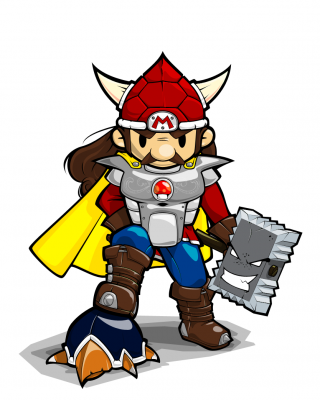 ….and to no one’s surprise, you can find anything
on the internet.

“Is a beautiful meld of action and RPG, of slasher and side-scroller.” – Excerpt from the Official Website

That’s more like it! “Slasher and side-scroller” is a much more apt description of the game than being any sort of implied Mario clone coupled with Viking overtones. Mighty Crew plays more like an old-fashioned beat ’em up with some RPG elements throughout. The typical progression has the player going through the level killing everything in sight, and gaining EXP and items along the way. The EXP and items are used to acquire new abilities and increase stats respectfully. Though why the website would contradict itself on the same page, and much less the very same paragraph, about its own genre is anyone’s guess. But for now, the point goes to Mighty Crew.

“Hundreds of Tools of Destruction” – Line from Trailer.

Indeed. The game offers you quite the selection of items and a generous amount of equippable spaces to outfit your character. The items ranging from mundane to rare, even those in the same categories have noticeable differences between them. While one may be a typical sword that simply hacks away at a monster’s life, another may slice ’em, dice ’em, light them on fire and spread that fire to any other monster that touches them until all that’s left is a wonderfully crisp buffet of monster meat. Of course, some of the better gear is kept behind a pay wall but even something like the sword that I just mentioned is available for free. I just so happened to be lucky enough to earn it as a reward. So for this claim, I proclaim it as the truth.

I’m sorry. I skipped. I skipped a lot. The dialogue really isn’t all that interesting and it often only serves to give you a primer on where the characters are, why they decided to go there or who they need to alleviate from their oxygen addiction. There are attempts at character throughout the conversations between Princess Vallindoria and the mighty barbarian you control but they mostly fall by the wayside during the heavy exposition. The story isn’t anything great as it is a typical tale with all too familiar beats; nothing really outstanding.

To explain, Mighty Crew gives you two control options for your barbarian badass. The first is an automatic option that basically has you pointing your character in a general direction and watching them fight. With a simple press on your phone’s screen, the character will walk to that location and automatically fight anything within range. The other option gives you more direct control, offering both a virtual joystick and an attack button to control your character. Both have their benefits, though while the automatic option makes it easier to manage your special abilities, I preferred having more direct control of my character. Regardless, the game plays fine in both options. 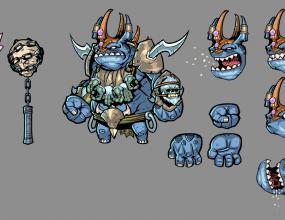 Protip: Using the Manual control, you can avoid all damage by
staying at the center of this boss up until its second form.

“Free Boost to Upgrade your Stats.” – Line from the Google Play page

Not so much free as they are “free”. There’s a price to pay, it just doesn’t come out of your pocket. Instead of money you are required to invest time as the game “treats” you to an ad (many times for another mobile game) for one of three random boost. Though the upgrades are very helpful since they can increase your health, damage or critical rate, the ads are a surefire way to break any immersion the game attempts. This isn’t even the only example of their liberal use of the word “free”, the game also offering one “free” resurrection per level if you are willing to watch the accompanying ad. Still free is often only associated with money and these ads are entirely optional, so in this case, I’ll give Mighty Crew a “point” for technically backing up their claim.

“No Time to Run Test! Mighty Crew Release!” – Excerpt from the website

In a rare case where I wish a claim made by a game company wasn’t true, this game could have used a bit of quality assurance. Even worse, the particular problems I ran into could have been easily caught with some testing. More times than I could count, I would defeat all of the enemies in a stage only to be trapped there waiting for the completion screen to show up. My dauntless hero denied a warrior’s death by faulty programming that forces me to restart the game instead of the evil that stalks the land like a true champion. A bit of testing could have also helped to root out another of the games major detriments: the repetitiveness. The game is a constant slog of entering a stage, killing everything, and upgrading, which then mirrors itself upon reaching the next stage. Sure, there are things to do in-between and playing it in short burst can stave off the impending boredom a bit, but the monotony is still present. I can only hope that some future testing can fix these two problems. 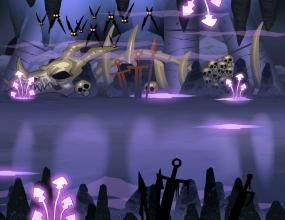 Thankfully, the game does mix it up with its level design. You’ll traverse the
long and flat cave, the long and flat dungeon, and…you get the idea.

“Find out how good our designers, wich are have made out game style so comic-attractive and brutal in the same time.” – Excerpt from the website

Nope. Not even trying.

So with three claims in the bag, two claim denied, a point I would rather keep in quotes, another claim that I wish didn’t go through and a big fat nope to end it all, we come to a grand total of 4+”1″ out of 8 or just 5 out of 8 claims kept if you round up. If my math is correct, it isn’t all that much lower than the 7.0 score I gave it up top. Mighty Crew isn’t terrible, but it isn’t terribly good. If played in short bursts it could even be a fun time waster. For now though, I leave you with a claim that I can keep. This is the end of my review for Mighty Crew and I’ll see ya next time.

If you are interested in trying out Mighty Crew: Millennium Legend, you can use the following codes for free in-game currency:  #press20x (1000 crystals) and #gift20 (100 crystals).

name = FaggotMon
email = wiopuwhef@aol.com
use_email = yes
jinglesong = JINGLE BELLS, YOUR SITE SMELLS, YOU GUYS ARE ALL FUCKING LAME! THIS SONG SUCKS, MY BIG NUTS, WHILE YOU ALL GET GANG BANGED! HEY!

Everyone saying die
While I go flying by
I’m on my way to the hospital
While everyone says “alright!”

and Batman saved the day

Batman’s in the kitchen,
Robin’s in the hall,
Joker’s in the bathroom,
Peeing on the wall!

Joker just went number 2
in Batman’s shoe,
Robin’s in the bathroom
cleaning up the doo!

Jingle Bells,
Batman smells,
Robin laid an egg!
Batmobile lost its wheel
and Joker got away!

OH
Jingle Bells, Jingle Bells
Grandma had a gun
pulled the trigger
and lost her finger in 1981

Jingle Bells, Jingle Bells
Grandma had a gun
pulled the trigger
and lost her finger in 1981

Jingle Bells,
Go to Hell,
This is goddamn lame.