I’ll smoke it while driving to school

IF YOU TELL I’LL KICK YOUR ASS

Submitted through the Anti-Barney the Dinosaur Song submission form.

name = barney dieses
email = emmadave
use_email = yes
song = banenry you suck dick you will diey cuse will put a bulit in you head.how likes zoey101 and icarly jack and josh the naked bothers band sponge bod ned dei class of id shcool scvier gide.hto dance on sunset do you wath nick this are all the shows zoey101 is my favotie,

Mary had a little bike,

She rode it on the grass

Everytime the wheel went round

A spoke went up her ass

nrigarutnicuim – v. to run out of toilet paper and resort to wiping your ass with the old boogery tissue paper you left in the trash can

Ex. The old man is so lazy at buying more toilet paper he nrigarutnicuimed.

“i have no desire for a half ass lover. i want someone to grab my neck and tell me i belong to them. i want to be wrapped around you on a Friday night in bed and have your lips be the last thing i taste before i go to sleep. i want you to bring me coffee in the morning and i want to rub your back at night. i want a love that can set my heart on fire and i want a lover who i can intoxicate with my madness.”

sarauehe – v. to wipe your ass with valid airline tickets

When it comes to reviewing bad games, it’s always a hard decision to make. Do I make a tongue-in-cheek positive review, or perhaps a sharply sarcastic review full of jokes, or just a traditional opinion about the hopes and dreams that “Chariot Wars” completely and utterly destroyed? For this review I’m not quite sure what direction to go, because Chariot Wars just leaves me confused and maybe even a little sad when reflecting upon my time playing.

Considering the game is originally developed for mobile phones, the basic features are limited. You have only three modes of play to choose from: Multiplayer, Single Player Time Trial, and Single Player Story Mode, called Championship. Multiplayer requires you to register an account with the developer’s web site rather than using Steam. Single Player Time Trial is racing around one of the four possible unique tracks, alone, with no A.I. to race against.  Each track has two variations: Night and Day – all of which are unlocked only through the Championship Mode.   Time Trial is consistently pointed to by the “Game Tips” and even prompted as a gate before you enter the real “meat” of the game, which is the Championship Mode.

Here’s where things get… “interesting.” Chariot Wars’ Championship mode is a graphic novel murder mystery story with boring gameplay in between chapters. The story is by far the only redeeming factor this game has to offer and is actually quite hilarious and dark, in a campy way. The backdrop of Ancient Rome is used as the Captain of the Guard is called to investigate a double murder – one man crucified and a woman with her throat slit, holding a tattered symbol of the Cabal, which is a group of conspirators who assassinated Julius Caesar. The murdered man is related to Ben-Hur (we finally have our sequel to Ben-Hur, ya’ll!) and before researching much of anything about the murder, the current idiot Caesar thinks it would be a good idea for the lead investigator of a murder to stop doing that and to instead replace the dead guy in the chariot race — and that’s when you take control of your chariot and race.

After winning the race, Quintus Octavian, the protagonist of the story makes out with a hot chick with a very large rack in some random room and then with her help figures out what the symbol is from, and so on. I don’t necessarily want to explain every facet of the story here, but you are rewarded for your effort of winning races with these story interludes. It may take a few tries depending on how well you know the track and if you can catch up to the computer players, but you’ll eventually win each race… hopefully.  Besides, you don’t have much else to do.

The gameplay itself is very standard in its rules – just get first place and win after two laps. For some odd reason there are huge floating coins that give you temporary speed boosts that don’t really make you feel like you’re going faster. When using a speed boost, everything becomes blurry and it feels like you’re all of a sudden in a Michael Bay movie, not knowing what the hell is going on. Considering the boosts are supposed to be good, they sure as hell don’t make you want to use them other than hopefully never having to play through that race again. Wonky physics, bad collision, weird animation, and the lack of any “warring” with other players (though you can bump into them) just isn’t fun. The scenery is also very strange, considering chariot races were always in a coliseum. There are snow-covered mountains surrounding you everywhere (and curving with the sky, which is fucking weird), waterfalls, random mixed species of trees, a blinding light source as bright as a sun coming out of a mountain (while it rains), and other oddities. This alternate dimension doesn’t seem like a very nice place to spectate or even race, not that the game is meant to be an accurate representation of anything.

And that’s kind of the game.   The music is generic and there is a strange chime that rings every time you click one of the menu buttons.  There are a lot of weird translation things going on, which adds a certain “charm” to the game, and the incessant badgering to go to the Time Trial mode to learn how to play is almost hilarious since you can’t play any new tracks unless you unlock them through Championship Mode, which you only do by beating the track! The races get harder as you go on, but you have to wonder how the difficulty is really ramping up when your chariot likes to all of a sudden go out of control a lot more often on turns as you progress.  At least the game didn’t crash while I was playing it.  You can also make funny things happen when you boost into one of the invisible walls on the race track.  If you ever get stuck in the scenery of the game, the only solution is to restart the track from scratch.

You can choose from several racers, chariot colors, and horses (all of which you have to unlock through play) which may or may not have an influence on your racer – it is sort of hard to tell. Another point of contention is that it’s $25 on Steam. Considering the amount of content the game has to offer, you have to wonder what the hell is going on.

And so there’s not a whole lot to keep you going. Other than the graphic novel portions and the strangely long CG video that displays a full length chariot race (presumably what you’d be “experiencing” while playing) full of random characters you probably don’t even play, you aren’t going to want to touch this game.

A reviewable copy of Chariot Wars was provided to Squackle. 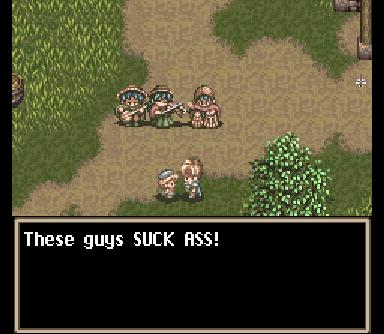 “During the last two hundred years, Americans have broadened the right to be an ass by eliminating barriers based on ass belief, ass ownership, ass payment, race, sex, and ass.  At the same time, the ass government has assumed a greater role in deciding who can vote and how elections should be run.”

benello – v. to clench your rectum in such a way that you prevent shit from falling out of it

malkbgceihdj – v. to have 200 bees sting you in the ass every second until you die.  If for some sick reason Squackle is up in 2064, add another 24 1/2 years to the date it is today if you still haven’t died, and you will be stung until that time.

1st off fuk ur bitch n yo fat ass mom

yea i no dats wrong

but tryin to battle against me

they call me long shlong

davepoobond: oh hai how r u

condemnedgirly705: Hey 🙂 do we know each other?

condemnedgirly705: lol its ok I was just looking for someone to chat with and it said you were online, I hope you don’t mind chatting with a bored single 23/f ? 🙂

davepoobond: do you like to go to the park???

condemnedgirly705: yea and i’ll do whatever you want me to do…

condemnedgirly705: lol.. I have a lot of both!! 😉 I have some free time now my roommate went out…I guess I love to tease 😉 Wanna see? its up to u…im in the mood lol

condemnedgirly705: Ok… let me set my cam up and I’ll show u my booty shaking skillz ..tell me if u like it ok ? LOL.. brb

condemnedgirly705: Ok, click here and it will bring u to my private 1on1 chat..There’s a few pix of me in there, click the “Accept Invite” to the left, then register and it’ll take you straight to my webcam, I’m there now.. 😉