Fun fact: this was actually made into a real movie for school. 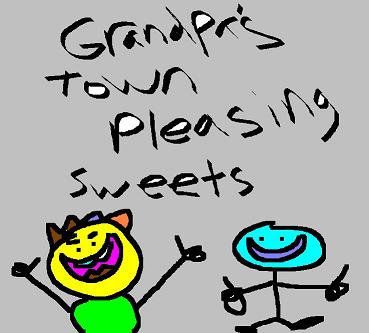 The SBC Behind The Lyrics title screen displays.

On this edition, of Squackle! Broadcasting Company, Behind The Lyrics…

You will experience, happiness, sadness, and anger as the members of the group…when Behind The Lyrics tells the story….of Grandpa’s Town Pleasing Sweets

The SBC Behind The Lyrics title screen displays again.

Another picture of the rap group appears, staying on the screen.

In a white room, MARK PETROLEUM is being interviewed

Oh yeah, I remember when we first started out. Man, we were having the time of our life, going from club to club. BUT THAT WAS OF COURSE BEFORE I HATED THEM ALL….

Another picture of the group appears.

Yeah, it was great, we went from club to club, doing our performances. I don’t even think we got paid for most of them. Just so that people would know about us. But basically we were going nowhere.

Another member, KEITH BANGS is being interviewed in a white room as well.

We were going nowhere. Me and Toby wanted OUT of Acornville.

Another member, TOBY SLICK is also being interviewed in the room too.

So I went down to Keith Bangs’ and said, “we got no money, what we gonna do?” and so he says “FUGGET ABOUT IT….lets get rid of Mark”

A still picture of Keith and Toby “yelling” at Mark appears

Just as the band was starting off, Keith and Toby couldn’t stand staying in Acornville, and decided the problem was Mark.

Goes back to Mark.

I don’t know what was wrong with my singing…I thought we were rockin!

Goes to a “performance” with Mark singing really bad.

Goes to Keith in the white room

I mean, we were supposed to be a rap group, and he’s over here singin opera! What kind of a rap group is that?

We OBVIOUSLY had to get rid of him. And another thing, he SMELLED like CRAZY. Everytime he opened that gaping of hole of his, you could smell last night’s Chinese!

Goes to a picture of Mark with his mouth open.

Mark’s bad habits and bad singing were the root of all the unsuccessfulness that they had.

Goes to the picture of Keith and Toby arguing with Mark.

Pretty soon after Toby came over to my apartment, we had to kick him out…and get a new singer. So that meant making auditions.

Goes to a picture of Mark, Keith and Toby sitting at a table in a row.

I don’t know why Mark was there, I guess he was helping us out get a replacement for him

A scene of Mark, Keith, and Toby sitting at the table, watching auditions for singing, like American Idol.

Someone is singing already and then he stops.

Now there’s two things, you need to be in this group. One – is image. The other is voice. And C is talent. You’ve got none! I NEVER WANNA SEE YOUR FACE AGAIN. YOU WANNA REPLACE ME IN THIS GROUP, YOU HAVE TO HAVE ONE OF THOSE

Girl, that was great. You go girl….out the door. Yeah go now.

Now I can see some potential in that….the potential to GET OUTTA HERE

The singer pouts and then leaves.

Goes to a still picture of Edmonem

And that’s when Edmonem came in the door.

Goes back to Keith.

I know my singers, and Edmonem was a good singer…..yeah….

Goes back to the scene with the American Idol thing.

Edmonem hums a few bars and sings a little bit, and then stops.

YOU’RE BAD. BAD BAD BAD. NO WAY YOU’RE GETTING IN THIS-

Goes to a still picture with Edmonem, Keith and Toby.

Yeah, our band was getting off to a good start. Oh YEAHHH!

Goes to a picture of Mark Petroleum, all alone.

But after we kicked Mark out, he was never the same. He became addicted….to soap.

Goes to a picture of Joy Soap.

Gosh, I just love soap…especially Joy. It made me joy….ful…. Gimme…… I NEED IT! AHHH!

Goes to Mark, and he’s just looking around.

Mark pulls out a syringe full of soap and squirts it out into his hands, laughing maniacally.

Goes to a still picture of Mark on the floor with a soap bottle next to his head.

I mean, Mark just went crazy after he left. Every time he came over to my house, he used up all my soap. I think in one week, I spent 70 dollars worth of soap, just so I could wash my hands.

It sickens and saddens me every time I see Mark. He always had pruned fingers.

The picture switches to Keith, Toby, and Edmonem standing around

As soon as Mark was booted out of the band, Keith, Toby, and Edmon went right away from underground to mainstream rap, without even being signed on to a record label.

The Record Executive, HABIBI THE CRAZY JUMPING ARAB is being interviewed in the white room.

So one day, I heard this great song on the rap station, K-RAP, and I say “Whoa, who is dis? Sign’m up, habibis!”

Keith and Habibi got pretty “buddy buddy” and often went to many parties with each other, after they got signed to Kabangaranga Productions

Yeah, I guess you could call me spoiled, but hey that’s just the way I am..

That stupid Keith, I was supposed to be the Record Exec’s best friend! ME ME ME ME ME!

Goes back to Mark

Why are you asking me this question? I have no idea what happened! I’m not even in the band…

GUY WITH A BAG ON HIS HEAD is getting interviewed now

Guy with Bag On his Head

Another still picture of the band.

After getting signed up, they made lots of money, but barely enough to uphold their lifestyle of living in garbage cans outside McDonalds, and they soon learned that they weren’t getting the bulk of their money.

The group’s manager, K SO is being interviewed

Yeah, so what if I stole most of their money? But in the end, I SHOULD be getting this much money. Lemme show you my reasoning.

K So brings out a piece of paper and a pencil, and the camera focuses in on it.

Goes back to Toby Slick

Man, we was only getting like 8 cents a show man. THAT’S robbery! We weren’t even getting minimum wage! I bet we’d have made more money working at Toys R Us as a shoe salesman than what we were doing.

Oh, I didn’t care. I was living in Habibi’s 15 bedroom guest house in Beverly Hills!

Right, so I was like “WHAAAT FOO” We aint getting no MONEY? I convinced Keith and Toby that we should KICK-K-SO-OUT of the system, and become our own managers

Goes to K So

AHAHA..wouldn’t they know, it’d be the end of their careers? Being your own managers makes you get too much money, and you don’t even do anything when you’re manager….ummm….yeah..I don’t know what I just said…never mind…heheh…heh…heh…..don’t you have someone else to interview?

Little did we know…hehe…it was a little…umm…too much for us to handle.

I wanted money man…I had my NEEDS man. I mean, I stayed friends with Mark, and it was a lot of money keeping my house stocked with soap for him to bask in. In a sense, it WAS his fault.

I hated them all, I wanted to destroy them all, even if it took one soap bottle at a time.

After a while, it got too much for everyone, and they decided that it was time to permanently….hold on let me turn the page….get rid of him.

2 thoughts on “Behind the Lyrics – Grandpa’s Town Pleasing Sweets”