If you are 30 or older you will think this is hilarious!!!!

When I was a kid, adults used to bore me to tears with their tedious diatribes about how hard things were when they were growing up; what with walking twenty-five miles to school every morning … uphill BOTH ways

And I remember promising myself that when I grew up, there was no way in hell I was going to lay a bunch of crap like that on kids about how hard I had it and how easy they’ve got it!

But now that… I’m over the ripe old age of thirty, I can’t help but look around and notice the youth of today.

You’ve got it so easy! I mean, compared to my childhood, you live in a damn Utopia!  And I hate to say it but you kids today you don’t know how good you’ve got it!

I mean, when I was a kid we didn’t have The Internet.  If we wanted to know something, we had to go to the damn library and look it up ourselves, in the card catalog!!

There was no email!! We had to actually write somebody a letter.  With a pen!  Then you had to walk all the way across the street and put it in the mailbox and it would take like a week to get there!

There were no MP3’s or Napsters! You wanted to steal music, you had to hitchhike to the damn record store and shoplift it yourself!  Or you had to wait around all day to tape it off the radio and the JD usually talk over the beginning and @#*% it all up!

We didn’t have fancy crap like Call Waiting! If you were on the phone and somebody else called they got a busy signal, that’s it!

And we didn’t have fancy Caller ID Boxes either!  When the phone rang, you had no idea who it was!  It could be your school, your mom, your boss, your bookie, your drug dealer, a collections agent, you just didn’t know!!!  You had to pick it up and take your chances, mister!

We didn’t have any fancy Sony Playstation video games with high-resolution 3-D graphics! We had the Atari 2600 ! With games like ‘Space Invaders’ and ‘asteroids’. Your guy was little square! You actually had to use your imagination!!  And there were no multiple levels or screens, it was just one screen forever!  And you could never win. The game just kept getting harder and harder and faster and faster until you died! Just like LIFE!

When you went to the movie theater there no such thing as stadium seating! All the seats were the same height!  If a tall guy or some old broad with a hat sat in front of you and you couldn’t see, you were just screwed!

Sure, we had cable television, but back then that was only like 15 channels and there was no on screen menu and no remote control!  You had to use a little book called a TV Guide to find out what was on! You were screwed when it came to channel surfing!

You had to get off your ass and walk over to the TV to change the channel and there was no Cartoon Network either! You could only get cartoons on Saturday Morning. Do you hear what I’m saying!?!  We had to wait ALL WEEK for cartoons, you spoiled little rat-bastards!

That’s exactly what I’m talking about!

You kids today have got it too easy.

You guys wouldn’t have lasted five minutes back in 1980! 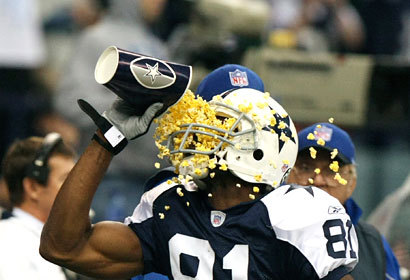 Q: What did the baby corn say to mama corn?

A man asked his wife what she’d like for her birthday.

“I’d love to be six again,” she replied.

On the morning of her birthday, he got her up bright and early and off they went to a local theme park. What a day!

He put her on every ride in the park: the Death Slide, the Screaming Loop, the Wall of Fear — everything there was!

Five hours later she staggered out of the theme park, her head reeling and her stomach upside down. Right to a McDonald’s they went, where her husband ordered her a Big Mac along with extra fries and a chocolate shake.

Then it was off to a movie – and hotdogs, popcorn, soda pop, and candy. What a fabulous adventure! Finally she wobbled home with her husband and collapsed into bed.

He leaned over and lovingly asked, “Well, dear, what was it like being six again?”

She half opened one eye. “You idiot, I meant my dress size.”

OVERHEARD IN A HOLLYWOOD STUDIO: “My last movie made over 35 million dollars.  One million on admissions and 34 million on the popcorn!”

Q: Why do soccer players have so much trouble eating popcorn balls?

A: They think they can’t use their hands.

etsrad – v. to eat popcorn with a knife

xylk – v. to eat popcorn with a spoon

gebceb – v. to eat popcorn with a fork

How long does it take to get all the popcorn’s popped? After serious amounts of time waisted and a series of failed expirements resulting in the kitchen flooded with Gas of burnt popcorn, I have finally waisted all my time to finally conclude this: Nothing. I have realized over and over that there is no possible way to get all the popcorns popped. Microwave popcorn is the number one cause for house fires and heart attacks and syphillis or insanity. Yes it’s true. There has been also some evidence in Bosnia and Britain that Microwave Popcorn causes the Ebola Virus. Anyways what the popcorn does is it spends about 3:00 minutes of your life watching a stupid thing inflate. This causes you to have anxiety to jump in the microwave, eat the popcorn and get severly burnt.

Also the “Popping” sound isn’t what you think it is. It’s actually a secret code thats transferred to your body. This code says to your body: “Cho mama is so fat, she brushes her teeth wit BUTTER.” Now your body gets all mad and trys to fight it off and shut it up. This causes you to go insane or get syphillis. I’m already insane so I wasn’t affected by the popcorns evil deeds. Beware, the popcorn has something popin up! Get it? Something Popin’ up? You don’t get it do you? Forget it, it’s over your head….