(Karen runs around the screen with her arms in the air.  She is clearly freaking out.)

Johnathon Huxworthy: Hey Karen!  Why are you flailing your arms around like a valley girl on a power drink?

Johnathon Huxworthy: Well, that’s not problem, Karen!  Odin Shpos has lots of supplies so you can practically make it all right now!  Without leaving campus!

Johnathon Huxworthy: Uhhh.. what are you making?

Karen: IT’S A SECRET I CAN’T TELL YOU!  REALLY, JOHNATHON!  YOU KNOW THESE THINGS ARE CONFIDENTIAL!  LIKE MY LOVE FOR HUNKY ANNOUNCER-TYPE MEN WITH DEEP VOICES.

(Julia is hiding under a rock)

Johnathon Huxworthy: Hey Julia, why are you hiding under that rock?

Julia: The big bright one that shoots those rays of light at my face!  That guy is so mean!

Johnathon Huxworthy: You know, Julia, if you wore a hat from Odin Shops you wouldn’t have to be afraid of the sun and get out from under that rock.

Julia: Wow… I never thought of that.

Julia: You know what else is kinda hot?

Johnathon Huxworthy: I haven’t the slightest —

Julia: I think there’s space underneath this rock for both of us.

Johnathon Huxworthy: Yeah, you see, I’m not into girls who hide under rocks.  See ya.

Julia: I feel so alone.

Sun: Hey Julia, I can keep you company.

(Don is on a computer)

Johnathon Huxworthy:  Hey don, whatcha doin on that there computer?

Johnathon Huxworthy: You know what you could be doing?

Don: Why would I want to do that?

Johnathon Huxworthy: Because its easy and convenient and it has a great selection!

Don: Do you get paid for this?

quelo – n. a commercial that is only slightly re-purposed using the same video and the same situation but changing something weird

Ex. This car commercial is a quelo of that milk commercial, all they did was replace that human with a goat!

(Jig Reed and Croy Thompson are having sex with their tigers and smoking cocaine with them.)

SHANE DURTON
…to tell you about the International Magicians society.
Yes, it is actually a real organization in which all magicians must
become a part of once they graduate from Magic School.

(Jig and Croy are licking their tiger’s balls)

SHANE DURTON
Yes, you get many benefits, like Free Jungle Sex w/White Tigers.
If you are a magician and you’re not in the International Magician Society,
we will send you death threats until you do!

(Jig is face down on the floor, and a tiger is sitting on top of him)

SHANE DURTON
As a part of the IMS, you must take the vow of never revealing the secrets
behind magic tricks.  If you do, we’ll kill you by submerging you in a tank full of water,
handcuff you, and lock the tank.  And you won’t be able to get out the way you usually can that I’m  not gonna say!
Now, its time for me to get some tiger lovin’, so if you’ll excuse me…

(Shane Durton is pounced by a tiger, and they start licking each other)

Bob American is the Captain (aka manager).
Joey McCurken is the First Mate (aka assistant manager).
Brandon Spaz is a pirate that shops at Formal Pirate Clothing.

BOB AMERICAN
Hello, how are you today, Mr. Pirate?  Welcome to the Formal Pirate Clothing store!

BOB AMERICAN
Can I help you find something?

CUSTOMER
I’d like to buy some clothes, but I just don’t know what wear, arr!!

BOB AMERICAN
What kind of look are you looking for?

CUSTOMER
I’m looking for a formal-looking suit, for work.

BOB AMERICAN
You’re in luck, we have a special on suits today.
We have many combinations that will suit what you need.

BOB AMERICAN
We have a black suit, that is a black jacket, black pants,
and a blue shirt with a blue tie.

CUSTOMER
Hmm.. that’s not really what I’m looking for… arr!

BOB AMERICAN
We have some black shoes that would look great with the suit you “arrrr!” buying.

CUSTOMER
Good, I’ll take those, too.  How about a pirate hat to go with it, arr?

BOB AMERICAN
Well, the only one that would go with your suit is this woman’s gardening hat…75% off!

BOB AMERICAN
Come up to the counter, and I’ll have my assistant manager process the sale for you.

In the back, the security cameras just show Bob American talking to air.  The Customer is a ghost!!!

BOB AMERICAN
Didn’t they go out of business 100 years ago?

CUSTOMER
Nonsense!  I just got it in the mail yesterday!

BOB AMERICAN
What is this mail you speak of?  Pirates do not have addresses.

JOEY MCCURKEN
Yarr!  It be a ghost, Cap’n!!  He has a damned locket around his neck!

CUSTOMER
Oh, this?  I got it from my dear departed aunt—

Just then, Bob American runs the Customer through with a saber.  Customer keels over with the sword sticking out of his chest as he bleeds across the counter and onto the register.

BOB AMERICAN
Oh.  He wasn’t a ghost, after all.

JOEY MCCURKEN
Oh.  I keep forgetting that the security system still shoots in interlace,
but ever since we got that new progressive flat screen, everyone looks like a ghost on it!

BOB AMERICAN
Joey, you just lost us a sale.  And I may very well go away for a long time when
the mall property manager gets a load of the water damage to the floor.

BOB AMERICAN
Ah, yes, how can I forget.

Posted on November 11, 2012 by davepoobond (DPB) Leave a comment

Posted on November 11, 2012 by davepoobond (DPB) Leave a comment

Posted on April 7, 2012 by davepoobond (DPB) Leave a comment
This entry is part 2 of 38 in the series The Squacklecast

Hello again, faithful Squacklers!  This week we talk about more random movies with the second episode of the Squacklecast — “We Planned This Out.”  Davepoobond and Solid Billy take on the pressing questions of our times, like “Why does Jean Claude Van Damme play the same character in Kickboxer and Bloodsport?” and realizing that Sean Bean is actually a lazy actor because he dies in practically all his movies so he doesn’t have to act anymore!

Vince Offer was arrested for an altercation with a prostitute.

And here’s his mugshot! 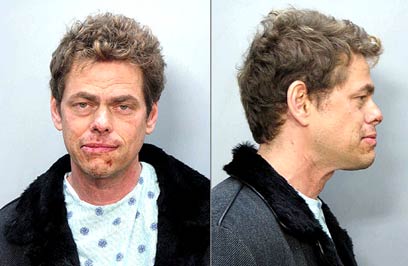 Vince Offer should just get a lavalier mic.  But he insists on using his stupid headset.

American Reunion is coming out.

Shannon Elizabeth could carry a movie by herself as a stereotypical foreigner.

End of Days is probably better than Collateral Damage.

There was a lot of innuendo in Home Alone 2.

Home Alone 3 was also a travesty.

There were only two black guys in Glory, a movie about a black-american regiment in the Civil War.

Dr. Who should reunite all the James Bonds in a “reunion” movie.

Little Man should be re-released in 3D.

Song of the South should be released in 3D, too.  But its in the Disney Vault’s Secret Chamber, never to be seen again.

Bloodsport vs. Kickboxer – more like red haired guy vs. black guy with a machine gun!

Sean Bean dies in all the movies he’s in:

Someone getting hurt or killed during a robbery should be a given, shouldn’t it?

Ca$h is the movie where Sean Bean dies twice.

Thanks for tuning in!  Next time we’ll be live at Roscoe’s Chicken and Waffles.

In trade I was trying to sell stuff:

Cardrek: wat do they do

Cardrek: i woulda bought em if u didnt attempt that pathetic ryme

davepoobond: its from a commercial

An annoying commercial.  Partake in the annoyance.

Ever see those head on commercials? Well, here’s a nice parody of the concept of those “hard-sell” commercials.

Scene I
(Outside One Government Center, Downtown Toledo. Monday, 10 A. M., June 9th.)

Mayor Jack Ford: Yes, little dude, what is it?

Ugly Little Harvey: Um, I have a question.

Ugly Little Harvey: But… you said I was a little dude!

Mayor Jack Ford: You sure are!

Ugly Little Harvey: Yeah, ok. Anyways, I was wondering what the true meaning of Flag Day was?

Mayor Jack Ford: Of what?

Mayor Jack Ford: Hmm. (Pauses.) When is that?

Ugly Little Harvey: Stupid new mayor. At least Carty would have indulged me with a nonsensical explanation.

Scene II
(10:30 A. M. Ugly Little Harvey walks down Madison Ave and by an alley.

Ugly Little Harvey: Um, who is it?

Voice: You have come to find the true meaning of Flag Day.

Voice: Come into the alley.

Fragrant Drifter: Kid, you have come in search for the meaning of Flag Day.

Ugly Little Harvey: Oh yes! I want to know what it means.

Fragrant Drifter: Then tell me this… can you guess what cologne I’m wearing?

Fragrant Drifter: Did you say “Tommy?”

Ugly Little Harvey: Um.. sure. That’s what I said.

Ugly Little Harvey: Ok, what does this have to do with Flag Day?

Fragrant Drifter: What’d you call me?

Fragrant Drifter: Ah yes. I was told about this day as a kid. Frankly I think people have lost their way when it comes to this fine holiday.

Ugly Little Harvey: But mistah, what does it all mean?

Fragrant Drifter: Well, many people remember Flag Day as the day I lost my arms.

Ugly Little Harvey: But… mistah, your arms are right there.

Fragrant Drifter: That’s right. And I found them on Columbus Day.

Fragrant Drifter: Yeah, not only did I observe them, I picked them up and sewed them on myself.

Ugly Little Harvey: You have the memory of John Madden. I’m leaving.

Fragrant Drifter: Ok, bring back some more car fresheners. And close the door! You’ll let all the heat out of my foyer!

Scene III
(Year 2093. Ugly Little Harvey is now an ugly old man, reminiscing on his past experiences with Flag Day.)

Ugly Little Harvey: BAH! What a fake holiday. Flag Day is too commercial these days. Ruined by Hallmark and Scary Movie 8. Flag Day brings up too many painful memories, just like Haley Joel Osment’s shooting spree or the Olsen’ twins eight marriages. I never trust holidays again. Especially not this one. The only one I enjoy is Bastille Day. Too bad France isn’t around anymore. They replaced it with a big Wal-Mart. I worked there once. In fact, I still work there, at the door. Good selection of berets. Well, my mailman, George W. Bush IV is here with my erotic literature.

(Ugly Little Harvey falls over, along with curtain.)