Posted on October 20, 2018 by davepoobond (DPB) 1 Comment
This entry is part 6 of 6 in the series Cashier Lessons

One aspect of this magical building is the bending of physics of sound.

Ms. Pamela’s intentions are questionable.  Whether she is truly a human within a rotting sack of flesh or an alien in an unconvincing human costume.  Anyway, that’s for later.  The point of this lesson is about Sound.  And boy does it ever make no sense.

If you ever have the radio/music on while in your convenience store while Ms. Pamela is in the building, she will always come and tell you to turn it down — no matter what volume it is.  She claims that the sound waves from “the radio,” which is pointing toward the trash can, is actually bouncing up into the air ducts, through the elevator shaft and into the study room (that is about 30-40 feet away from your convenience store) in enough amplitude that it is possible to hear it!  Not only is this clearly bullshit, but simply impossible.  On many occasions, the radio is nowhere near as loud as the refrigerators and slushy machines that are inside the convenience store!

Because she rules the building with an iron fist and we rent the place from her, she wants to always feel like she’s in control of everything that is going on.  That imperialistic, alien, sound adept masterbitch.

Submitted through the Joke submission form.

name = black people can kick any white persons ass because white bitches cant fight
email =
use_email = no
qjoke = i aint got no jokes i jus wanna let u no i wish every white person would die u bitches!!! did yall notice that white girls luv sucking black dick and most hookers and crackheads are white and y dont white people have ases and all whites r anerexic FUCK ALL WHITE BITCHES!!!!!! I COULD BEAT ALL YA ASSES

davepoobond: i have 4 classes tomorrow that we watch a movie in

davepoobond: that’s not a real site..

stimpyismyname: whatcha gonna do about it 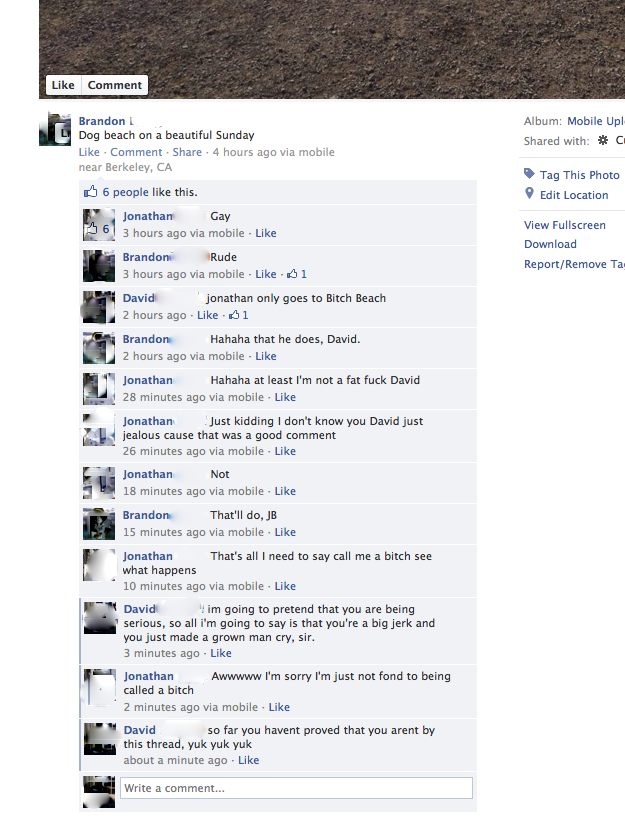 The guy eventually apologized and deleted all of his posts, saying that he was drunk when he posted.  But that isn’t funny.

This is the version of the playground rhyme that I remember from my elementary school.  There are obviously a lot of variations.

Fourth the one with the hairy chest

For years now the great Squirrel Army has been trying to conquer the world, unbeknown to the public. Through their clever and devious military tactics, they have succeeded thus far in conquering the sixteen (16) small countries in Africa and Asia, including; Gambia, Guinea-Bissau, Comoros, Lesotho, Mauritius, Swaziland, Reunion (which they call Crap Land, for some reason-maybe they don’t like the French), Oman, East Timor, Bhutan, Kyrgyz Stan, Turkmenistan, North Korea (yes, Squirrels have nukes!), Tajikistan, Cyprus, and Maldives. Well, I said included, but that’s all of them. Don’t complain; now you know where not to go!

Only the amazing defenders of all things not Evil Squirrel related, the Uber-Peanut Army (or Peanut Army for shortish) has stopped them from a more complete conquest. Yes, you read that right! Super Peanuts are at war with Evil Squirrels in order to stop them from taking over the world!

Not too long ago, in fact, the Squirrels were close to winning, but in what seemed like the end of all things non-Evil Squirrel related, new hope arose; the Great and Mighty Almost-All Powerful Orange Peanut!

Now, as you know (or at least I do) anything Orange (with a capitol O, that is) is magical. Now, in Orange Peanut, the O is most definitely capitol, so the logical conclusion is that Orange Peanut is magical, right? Of course it’s right! So, this Orange Peanut was a magical Super Peanut who rose to be the leader of the Peanut People and…um…uh…hmmm….*thinking of words*………laid the smack-down on those friggin’ Squirrels!

Well, he actually didn’t do it by himself, or with just him and his Peanut Army; he help from a Singing Cat named Juke (that is; Juke the Singing Cat), but that’s a REALLY long story, so for now we’ll just say he did it alone.

After he whooped the Squirrel Army’s ass, he began a top secret project (actually his scientists did, but it was really his idea). It was a really good plan, meant to make a super race of Peanuts. And guess what? It worked.

After three long years working, his scientist devised a plan to make all the Peanut People into Super Peanuts; they painted the entire populace of Peanut City (for security reasons I can’t tell where that is-never trust anyone!) Orange and changed their name’s from Peanut People to Orange Peanut People (the city was also called Orange Peanut City). Now that all the Peanuts were magical, the easily kept the Squirrels at bay, but failed to defeat them because the Squirrels had gained a new ally; Brussels-Sprouts!

I know Brussels-Sprouts aren’t Orange, but they ARE magically EVIL! I mean, they stink, they taste bad, and they give you really bad gas! Can’t much more magically evil than that, can you?

Well, enough un-important details (for now)! I really should get back to the history of the Orange Peanuts.

Ever since then (which was a rather ling time ago) the Orange Peanuts have been fighting and dieing bravely to protect everything non-Evil Squirrel related.

So help the cause; if you see a squirrel that looks even mildly evil, kill the bitcher!