I had a dream that I was out in the desert or something. The sand was red and there weren’t any trees, but big rocks every so often. There were a lot of people there, and there were a lot of houses. I wasn’t too far from my house. I looked up at the moon (which was very close). It was really hot, and the moon turned around pretty fast, and it looked the same except it had its own “red eye storm” like Jupiter. It’s kind of hard to describe. Anyway I pointed it out to my mom, and she said “that’s normal, they throw all our trash up there, you know?”

I thought “hmm, all that plastic up there is burning making it hot down here…” It seemed like it was raining fire from the moon. All of a sudden, it blew up. Everyone started screaming and went back inside their homes. After the moon rocks fell, I went over to my friends house, and there was my Grandma. She said his family wasn’t there because my friend was at the hospital. She pointed out the window shutters on the window, and said something about how cheap they were because a rock fell through. Then she disappeared.

Then it rained rocks again.  Afterwards, I was crying and I turned on the TV. To get my mind off everything, I turned on the TV and watched cartoons, while there was another TV with the news on. It had a bunch of people talking about the moon blowing up, and how it was more horrible than September 11. The rocks fell again all of a sudden for the last time. I went outside to see what happened, and there were a lot of people on hospital beds, screaming because trash and rock shot into their body.

I woke up then. What a weird dream. I could barely describe it all. You should’ve dreamed it yourself…to truly understand.

Would you like to have proof that anything can be made into a television show? Here you go!

Rock Stars is a show about men (manly men) who scale walls of rocks next to roads and poke them with sticks until the rocks fall. This is all it is about. It is 30 minutes of guys acting macho and digging rocks.

While we’re making shows about boring jobs why don’t we make a series about insurance salesmen or pizza delivery boys? I wish there were more to write about for this review but that is quite literally all there is.

So if you get your rocks off to people getting rocks off, this is for you. Otherwise, rock this show. I give it a THUMBS DOWN. 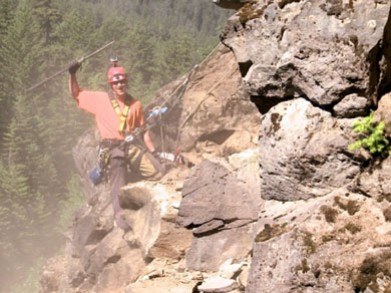