Passthat: Slash cry is selling full clear heroic HFC with all loot reserved for your specific class/spec. Every saturday @ 9pm Eastern Msg me for more info! Takes about 2 hours

Moneypennie: Pay money to lose self-respect by buying achievements? No thanks.

davepoobond: I loose my self respect

davepoobond: im making fun of you by making a typo

Moneypennie: i don’t understand how that’s making fun of me… you made the error, not me

davepoobond: cause “lose” and “loose” are the usual error

Moneypennie: lose is the verb to lose, loose is to be loose

davepoobond: i understand. i added an extra o to make fun of you

Moneypennie: that’s what i don’t understand?!

Moneypennie: you should make fun of people who need to buy their achievements in a game

Moneypennie: enough o’s for ya?

davepoobond: no need for the personal insults

Moneypennie: and it wasn’t a joke

Moneypennie: i’m going to need to rethink my opinion of you after this interaction

davepoobond: who am i? who are you?

davepoobond: this is the first time im seeing your name and you come on my property and insult me

Moneypennie: my alt was in your guild for a while

Moneypennie: and i’m a known AH entity for years, lol

davepoobond: where is the sense of entitlement

davepoobond: i dont buy, i sell

Moneypennie: i never attacked or insulted you

davepoobond: our leaders are stupid, they have all the smart ones

Moneypennie: i’ll see you around

davepoobond: im a free trader, but im a FAIR trader

“The moving ocean of people and lights gave the affect of a rustling army of darkness combating the unforeseen holy forces of light, because they’re in the light and this is a bad sentence.87”

“An example of irony was the time when I was making a joke about the punctuational use of a period, but was taken as a joke about women.”

“My friends appeared gauche in my presence by talking in slang, and not keeping the right grammatical structures we learn so well in Miss Horny’s class.”

“To have orthography, you have to build up an actual care for having all of your words spelled write, and use sensefully in a grammatical stand point.” 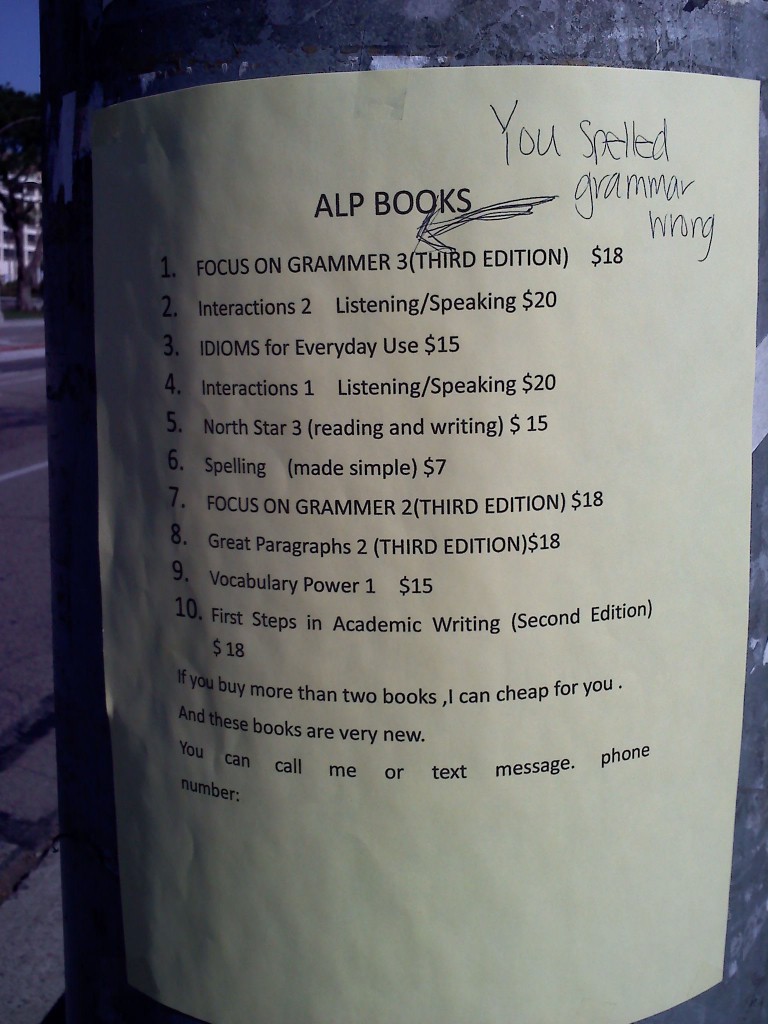 I found this by campus. I deleted the phone number off it. 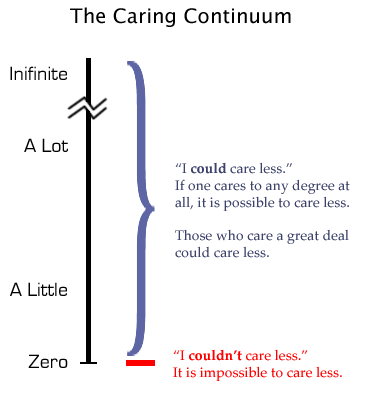 Posted on March 3, 2011 by davepoobond (DPB) Leave a comment
This entry is part 6 of 13 in the series Dave's Breakdown

I kid you not, this is the exact text from which I found on a poster board at my high school.  The spelling and grammar errors are exactly as they appeared on this poster board.  I found this around 2004, and wrote up my part of the article when posting.

“An interview with Helen
Made by her son Michael

Q: What was your impression of America before today?
A: peaceful life and today my view of America is I hope there are no more wars”

I don’t even know where to begin.  How is it a view of America to “hope there are no more wars”?  You make it sound like America has always been in a war.  I guess we’ve been in one for 10 years, and since this was answered around 2004, guess you’re very not impressed by America anymore or something.

“Q: Why did you leave Burma so suddenly?
A: a riot broke out in the city I was living in from a group from Chinese government”

One riot and that makes you get on a boat and go 5000 miles across an ocean?  I’m sure there’s something more, I don’t know, MEANINGFUL to pick from a list of reasons for leaving Burma.

“Q: if you went back in time and if did not have to any place you went what would it be?
A: China”

You’re not even from fucking-China.  You’re from fucking Burma!  Also, what the fuck kinda question is that to ask?  Who the fuck cares if she can go back in time to an indistinct era to just “go somewhere.”  What the fuck is she gonna do by going back in time?

“Q: Why did you immigrate to Canada instead straight to America
A: the weather was good and there are many more job opportunity”

So, when you got on the boat to go to Canada, they handed you a brochure which outlined “the weather is good” and “there are many more job opportunity?”  How the fuck do you know that if you’re getting on a boat in Burma?

“Q: what the reason that most of your family members stayed in Canada instead of coming down?
A: the health care union was very good”

And I guess you didn’t care enough about health care which prompted your movement to the United States?  I don’t get it.  If you were so inclined to move, then why not the rest of your family?  This is about as ridiculous as the reason you chose to leave Burma.  This woman sounds very finicky.

“Q: in your opinion how is life in the United States differ from life in Canada?
A: there is more stress in America while in Canada it is more of a relaxing life”

Not only does she leave Canada for nondescript reasons, she says Canada is BETTER than the United States.  Why the fuck didn’t she just go back to Canada if it was too stressful for her?

“Q: if there were no riots in Burma would you have still made the immigration to America?
A: most likely because I wanted a better life”

Yeah, right!  You just said the only reason you left Burma was because of the riots.  I don’t think you actually know what you would have even done.  How would you know if the weather was good or not if it wasn’t for that handy brochure they passed out on the Passage to America boating line?

“Q: what is one thing that is important to you in America?
A: My job”

So, let me get this straight.  Your son, interviewing you for his class, asks you what is important to you in America.  And you say your job.  You don’t say your son, who is standing right there asking you this question, hoping to hear something that would make him learn how to write English better, but no.  You throw it back into his face and tell him that your stinking 9-5 that you somehow convinced someone to let you have is more meaningful to you than your son or your family in America.

“Q: what is the most charitable thing you have coming to America?
A: security, financial stability, and many others”

This question doesn’t make any sense.  On top of that, the answer makes even less sense.  How the fuck is security and financial stability even considered charitable?  What the hell does it even mean to have something charitable by coming to America?   English is hard.

In closing, this lady is fucking stupid.  Just looking at her responses makes you wonder what the hell she was smoking.

“Sorry ma’am, but bad grammar is no excuse for vandalism”

Q: What is Kris Kringle’s favorite part of a sentence?

grammar fiesta – n. a party where everyone parties around and crap while learning grammar