Made in conjunction with davepoobond. 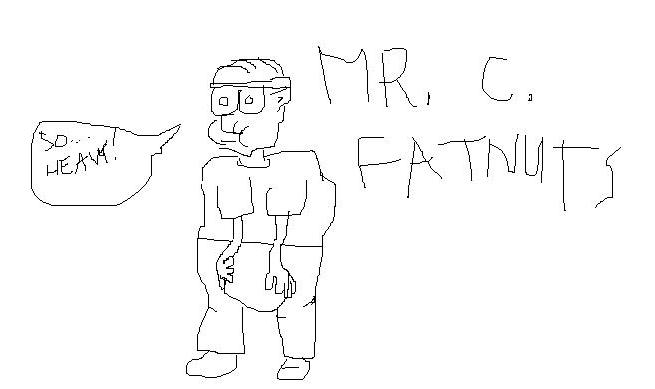 This is a documentary of what Mr. C Fat Nuts eats everyday (or mostly everyday) for lunch, while elmoisfurry is in his computer class thingy, bored off his ass. he was inspired to do this when he saw Mr. C Fat Nuts eating like a lion through the window that separates his class from Mr. C Fat Nuts’ class. And other random occurrences with this fat nutted man.

elmoisfurry: As I looked through the window to the other class, I saw Mr. C Fat Nuts going “RAWM-RAWM-RAWM” and chewing his corn. Then he ate his soupy thingy, I didn’t really watch what he did with that, I just saw him eat it sort of. Then he started eating some cakey thingy, ripping it apart, and jamming it in his mouth.

elmoisfurry: There was a bag on his desk and near the bottom of the bag and there was an inch of some weird yellow paste, and it looked like he had a whole bag of paste for lunch. Then I saw him eat some goopy chicken type thing, I had no idea what the fuck it was. I saw him hold his fork really tightly, then Mr. C Fat Nuts stuck his fork into the food in the bowl, into whatever was in the bowl, took it out, and I saw that it was all clumped together in one slab of slop. Then, in one hand he held the thingy on his fork, and was eating it, going “AWM AWRM AWM AWRM,” with the other hand he was typing on his computer, as he ate. That’s all I saw.

davepoobond: Today elmoisfurry was being a bitch, so this is all that davepoobond can remember, and elmoisfurry is such a bastard, that he wouldn’t tell him what he had on the 6th either

davepoobond: elmoisfurry said something about Mr. C Fat Nuts dipping taquitos into the bowl of guacamole and eating half of the taquito, then dipped the taquito back into it, and then he chugged his diet Mountain Dew. Again, elmoisfurry was being a bitch so he wouldn’t give a quote

One thought on “What Mr. C Fat Nuts Eats For Lunch and Such”