Posted on October 1, 2007 by stimpyismyname 2 Comments

The Sims. Great game, huh? well not really, but apparently everyone else thinks so. Anyways, going online is the next “logical” step, right? Well it might be good if they just made the game multiplayer. That’s what we thought it would be, right? Well it’s really not even the same game. There’s no point in getting skill points. They kind of help you get more money (get to that later), but the money’s not important. Who wants to design a house? It’s boring! Then you have roommates.. That was a good idea, but one always stays on 24/7 and then when you go back on he’s got perfect stats and he’s ben breaking the pinata all bight and bought 5 pizza makers and is raking in all the profits and tells you to give him all your money or he’ll kick you out of the house!! Eh… this isn’t going too well.. I’m gonna organize this into liitle sections..

Actually ok, but kinda buggy. it’s got a whole interface for “email” and “instant messages”. Good ideas. I like the whole city idea, where you live in a …city…ok, it’s not too innovative, but I was impressed.

whatever! screw it, you all have seen the sims. what i didn’t like is you can’t make your own skins or import them from websites (If you can, then you’re the only one that sees the difference).

Sucks! I hate the Sims sounds! you have to buy a radio to hear any music, and when you do, you feel like you’re listening to ‘Hit Clips’! Sucks! I hate the retarded “language” the sims have. “blah bloo blee blah?” “Bloo! Bloo! Ble ba ba be bo te!” Shut the hell up! And that tv pisses me off too. another hit clips piece of crap. It shows thes static images of a guy holding a sausage. It’s supposed to be “horror”. I hate it how you can only hear stuff when you’re looking at it, too.

This is the suckkiest part. THIS GAME HAS NO POINT. To me, it seems like the whole object of the game is to get money to buy crappy items that have minigames that you can WATCH your sims play. And “going to work” is the biggest load of crap i ever played. there are three jobs that actually pay good because they’re the interactive ones.

1) pizza maker- This thing blows. ok, theres four people around a table. they each have three ingredients. they might be different sizes, or different altogether. the goal is for everyone to put the right ingredient and size onto the pizza so they are all the same size and it has three required ingredients. Whoppie. You get more money for making a bigger pizza, so of course everyone puts on a large ingredient as soon as they get one. most often the pizza comes out as a charred mess. you can talk to each other during it, too. the typical pizza goes something like this:

Guy1: I got a med doh, sml sauce, and lrg anchovies

Guy1: what the hell! we don’t even know what size we’re making!

Guy4: I already did that! you can’t put in two of the same thing!

Guy3: you can’t do cheese cause i just put mine in!

Guy1: no! come on! i really need the money! dammit!

Guy4: cheese is in

my point is it sucks ass. all the jobs are basically the same thing. it basically boils down to a chat program.

Or better yet, since you like the sims so much, buy all the damn expansion packs they keep pulling out thier ass. 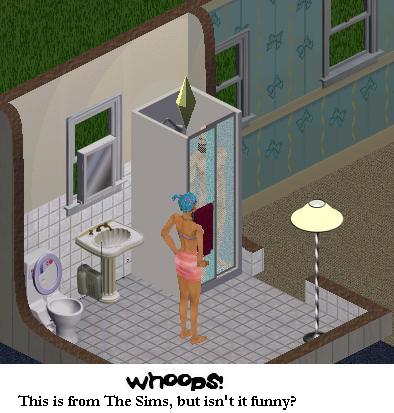