Game by Vertigo Games, made with Game Maker.

I’d read about this game a few days before it was released, and being the simulator loving mormon I am I downloaded it the first day the author released it to the public. Ore No Ryori means “my cooking” in Japanese despite what the loading screen says and the game is just that…cooking.

A relative of yours is ill and now you’re the chef/dishwasher/waiter/everything that isn’t the cashier of his restaurant. Which must’ve been pretty crappy before the relative became ill because you start out with nothing but some pizza and beer to sell. The action starts almost immediately, and people start running in ordering pizza and beer left and right. The goal is to raise $30,000 in 40 days or the restaurant will be shut down for….some reason. No borrowing money from granny’s purse now big boy, it’s time to sell nachos.

At the end of every day you have the choice to buy objects to upgrade your restaurant. There’s a tip jar for customers who got orders that you did just right, a candy rack for the guys who got burnt pizza and over-filled beer (which is like me ordering a pizza, getting two instead, then not tipping because I only ordered one), some safety objects, some new food to sell, a hot bar, and various electronics. The safety objects are good for bribing the Board of Health who come by every 4 days to stick their penis in your snacks. If you fail the inspection you have to hand over five hundred big ones, which will most likely piss you off. The new foods that are available are nachos, burgers, steaks, and soup. It’s best to get all the food early in the game if you want to actually win.

After buying all the food, things can get pretty hectic. Running after a thief while handing out soup and cooking a steak can be quite a workout, as well as serving the bastard that comes in every two seconds wanting a beer. The mailman comes by every now and then and gives you either bills or a package. The bills can either result in you losing or gaining thirty-five dollars, the package is from your relatives, which is sometimes a picture (even though after you get the first one, the other ones don’t show up) and other times two hundred dollars, which isn’t half bad for a sick guy. The before-mentioned hot bar is good for cash and nothing else (like everything else in the game), people run by it and grab food, leaving fifteen dollars in with the Chinese eyeballs or whatever the hell is in it. Last and probably least are the electronics. There’s a TV to increase the customers’ waiting time for food (I don’t think it works), a phone that, when picked up, is almost always a seventy dollar loss by your wifebeating landlord, and actually I think that’s all the electronics there are, a bug zapper sure would have been appreciated.

So did I like this game? Yes I did, very much so. I’ve played it for two or three hours and can now safely consider myself a master in the vitual cooking realm, which probably won’t score me that many dates now that I think about it. But everyone knows I’ve played Mark Platinum now so there’s no chance in hell I could ever get a date with anyone ever again. Sure this game may not have taught me all there is about cooking, but sure taught me that using too many parenthesis in a review makes you look like an idiot.

An angry pirate stands at the meth lab while I pour him some home brewed urine from the tap.

Game by Vertigo Games, made with Game Maker. 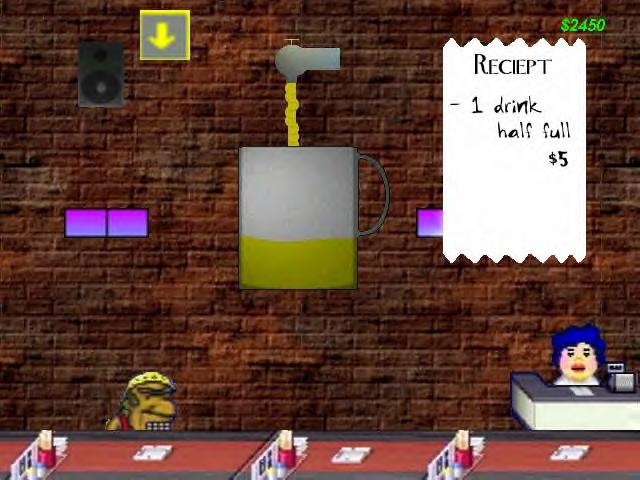