There’s a lot of bad games made with Game Maker, but this game is not one of them. I’ve spent so many hours playing this game that my fingers and eyes have gone numb. Wait…am I reviewing Mark Platinum here? Well then let me rephrase what I’ve said thus far. This game IS one of them, and I hate it about a whole lot.

For one, the size of the screen is about 9 x 9, so you better get the magnifying glass when you’re ready to play. Also bring about eight bottles of Motrin also. The game begins with an introduction story so pathetic and misspelled that I wonder if the designer put any thought into the game. After playing the game for five more seconds, you will see that the answer to that is no.

Aliens have invaded Asia and are headed for Europe! So why the hell do I start off in a room with a backdrop of Egypt? Last time I checked, Egypt wasn’t in either Europe nor Asia….ok mister smarty man, whatever you say! Pressing right makes Mark move right..that’s all. The maker was too busy chugging anti-freeze and masturbating to Ateens videos to even make a walking animation of any sort. Pressing up will make Mark move up, again with no kind of animation. Video game characters sure do suck these days, all they every start out with is the ability to jump really fucking high and make enemies dissapear and make a weird sound when landed upon. After walking forward and trying to jump over enemies for a while you hit a flag and are transported to the end of the game. Ok maybe you don’t but a guy can dream can’t he? No? Well fuck you too.

The second level has ice or something, I don’t really remember. Anyway, there’s a gun the size of a mountain in which you can pick up if you walk into it. The gun then magically turns into a normal sized gun. When fired it shoots about eight hundred pool balls, TEH ENEMYS HAV NO CHANS.You have infinite lives but it doesn’t matter because the game blows infants for jawbreakers. And everytime you restart a level, the music repeats from the beginning. May I add that the music is like listening to a barn orgy involving your whole family and a group of very dirty pigs. 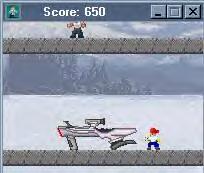 The giant pussy gun, this is the whole size of the screen.