Don’t know who to vote for this election? Well, luckily for you, there’s the Presidential debates, broadcasted to the millions of people in the United States and all around the world. These vital presidential debates have affected the outcome of the choice America has made since the JFK era. During these debates, the main presidential candidates and their vice presidential counterparts duke it out in front of America, with fancy words, beating questions around the bush by avoiding them and answering them indirectly, and many more things. Didn’t have a chance to watch the debates because you were at work? Well, Squackle’s one and only davepoobond is here to tell you who to vote for, why you should vote for them, and whether he gives a good reason or not is of no concern to you.

This year, we take a look at the three Presidential Debates of 2004 between John Kerry and George W. Bush, as well as the vice presidential debate between Dick Cheney and John Edwards. The descriptions of each will be a basic synopsis, and will not go into great detail, as we see most of that as really really unneeded, and if you wanted to know more about it, I’m sure you’d want to go to an actual news site (and watch the freaking debates yourself, and form your own opinion) than taking what you read on a humor web site called Squackle as 100% truth. Anyhow, on to the debates!

There has been a lot of tension between the Bush and Kerry camps, after demeaning commercial after another funded by private organizations are constantly shown on TV, as well as accusations in their speeches to insignificant groups of 50-100 people. Bush accused Kerry of being a “flip flop” one million times in each of his speeches, while Kerry said that Bush misled our country into war. Bush is also rumored to have not served during schedules times while he was in the National Guard, while Bush says he was there the whole time. He’s the son of an oil tycoon, and rich as a mother fucker, so are you really gonna believe that he risked his life in the National Guard? I doubt it.

Some may call these debates the “War of the Ages” almost becoming a movie, or the beginning of a Mortal Kombat fight during the “vs.” scene. 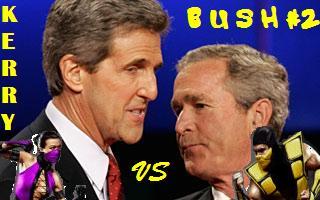 Not until the first debate did I even see these two together without having three states separating them. It was almost laughable to see them shaking hands after they both had strucken at each other’s credibility and track record. So, the first debates focused mainly on the war on terror, mainly focusing on Iraq and how they never had any “WMDs” to be found after we took Saddam from power, in a more formal debate forum, with both candidates having a podium. Whoopidoo, we got rid of Saddam, now we can take the oil there to save money at home, except OPEC increases prices so we’re not actually saving any money. Throughout the course of the 1st presidential debate there was at least a thousand times that “weapons of mass destruction,” “Iraq,” and “terror” had been said cumulatively. It made me want to stab myself in the ears, because you hear those words over and over and over and over and over and over and over. Bush just tells lies and lies and lies more and more, and Kerry tries to tell you what Bush is doing is fucking wrong, and how we went into Iraq was wrong wrong wrong. Bush says it was right right right and through a course of appearing very pissed off through the whole time, like Kerry would even have the nerve to bring up things that were happening not as great as the President was making it to be.

Basically, Kerry 1, Bush 0. Bush seemed like he was not prepared for the onslaught brought on by Kerry. Kerry practically raped him, and from the appearance of the poll results done by news agencies after the 1st debate, Kerry’s approval rating went up. Bush just proved to the world even more how he was an ignorant fool, and Kerry at least made concious and knowledgable debate points against Bush, with practically no answer except scoffing and that stupid smrik he always has. He was talking to Kerry like he was talking about a terrorist. People had also noticed that Kerry didn’t talk into the camera like Bush did, and saw it as a sign that Kerry did not want to speak to the American people at home, while Bush did talk into the camera. 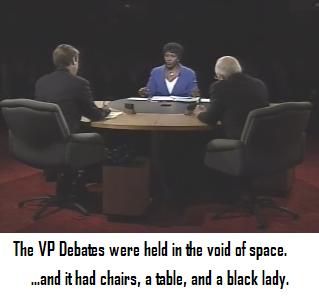 Well, we heard the president’s views on things, what about their VP candidates? John Edwards, former Democratic Presidential Candidate Hopeful, has now partnered up with John Kerry in hopes to defeat Bush and Cheney. Cheney, with his usual “I’m so rich and I’m too good for everyone except for the Arab royalty and Halliburton” look, debated to keep his high-paying, high-power job in the United States government, while John Edwards hoped to relieve Cheney of his duties. 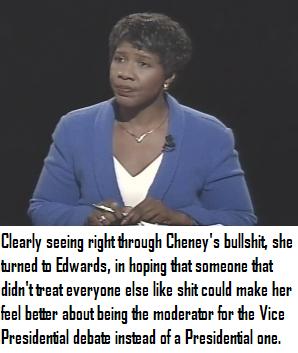 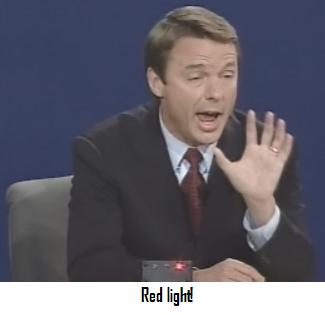 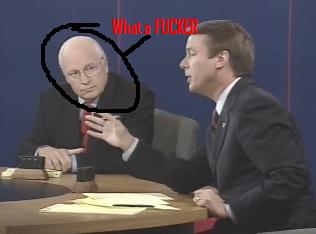 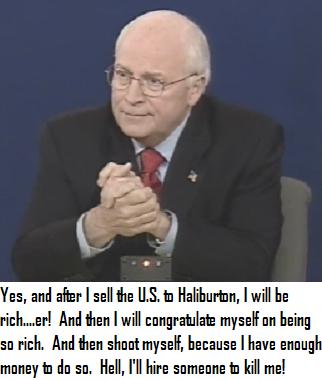 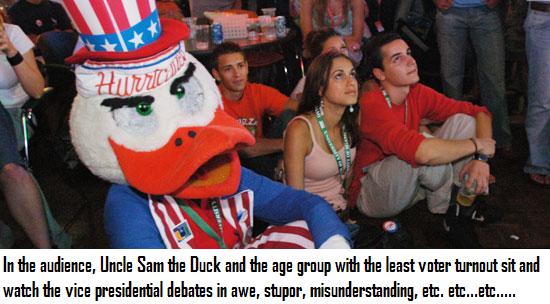 The stage has been set, and through the course of an hour or so, it came out to be that Cheney and Edwards had a very good debate, and no one person could be declared coming out ahead of each other.

But one thing could be determined from the course of the night: 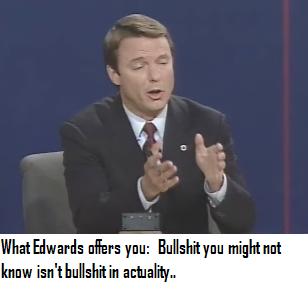 2nd Debate: Town Hall Setting. No podiums, candidates sat on stools, as they heard questions being told to them by audience members, about domestic issues.

So, after Kerry had shamefully ripped Bush a new one after the first debate, Bush started to take these debates a little more seriously. Even though Bush may not have been nearly as bad this time, he was still using a lot of “umms” and pauses, in genuine Bush-style. Bush came back with a lot of anger, while trying to keep himself contained. However, the most notable part of this debate is when Bush interrupted Charles Gibson from ABC News and un-rightfully rebutted a statement by Kerry, after Gibson had told the president that he was not allowed to. This sudden outburst of rage had broken the rules of the debates that had been set forth, and while Bush was talking OUT OF TURN, I was waiting for that buzzer than never came. Bush should NOT have been given that opportunity to speak, as it broke the rules of the debates. Kerry, on the other hand, did not make the mistake of rebutting a statement by Bush out of turn, even though it came close to it. It seemed that Kerry had more control over himself when it came to that, but it came very close.

The questions that were presented were all about the domestic issues and how they would change under Kerry and “improve” even more under Bush. Kerry said that Bush promised you more of the same, while Kerry promised change. Bush repeatedly kept saying that Kerry “flip flopped” over and over. Bush kept telling everyone to look at this voting record. In all honesty, we should look at BUSH’S voting record. Look at the decisions BUSH has made. Sure, Kerry supported Iraq at one time, most of us did, because we ALL thought that Iraq had WMDs, because that was what we were TOLD BY BUSH. Kerry doesn’t have his own CIA, Bush does. Bush knew more about the things happening in Iraq (whether or not they actually had anything) than Kerry did. All that Kerry or WE even believed was what our PRESIDENT, our PRESIDENT told us. I doubt that Kerry is able to send in his own team of CIA operatives to conduct their own investigation in Iraq to find out information.

And if there is, so sue me. It doesn’t contradict the fact that the president lied to us. The results of this debate had helped Kerry out a little bit more, but everyone said they were basically equal.

3rd Debate: I didn’t watch it cause I was at work, and I’m too lazy to watch it online. I heard they were basically equal though.

Conclusion: We all know Bush sucks, so why would we want to keep him in office? Outsourcing has grown, people have lost their jobs, the economy is down, people’s lives have been RUINED because of soldiers killed in the War On Terror, and not to mention the U.S. government is in a shitload of debt. Why do we want Bush to stay in office? We know he’s done nothing but horrible things to the United States. To assure that Bush is OUT OF OFFICE, I’m saying to vote for anyone else but Bush. If you want to make absolute sure of this happening, vote for Kerry. If Kerry sucks, then we can just get his ass out of office in the next four years. We know what doesn’t work, why do we want to stay with it?

The comic-strip thingy is by Soup Nazi

Everything else is by davepoobond