The California Recall election is finally God damn over. I thought that whoresnatch Gray Davis would appeal the election in the courts, but he didn’t. If he did, we’d never hear the end of the fucking thing, and his term would be over before anything changed.

I for one, am very glad that Gray Davis is out of office, though I don’t nearly as much support the way it happened. The Recall does seem like a cheap way for the Republicans to gain power in California. When Gray Davis said that the Recall isn’t democratic, it really wasn’t. It was Republican, and that was the main problem.

This is a list of reasons that I support Gray Davis getting his ass kicked out of office:

Okay, now I’m done complaining about Davis. This is all I can think of right now.

Now onto the actual topic at hand. The California Recall. Never has any election ever seen so many stupid candidates. There’s about 10 actual candidates that anyone would vote for. The other 9 billion are just stupid idiots that think that they can get some sort of TV time and actually get their views heard, which is bull cause they won’t, and they’ll only end up getting votes from them and their friends and family. Such a waste of votes. They probably actually thought that 3 million people would vote for them so that they would actually gain the position of governor. Seriously, does that make sense?

So, after all the bullshit of the Recall, it finally came down to Arnold winning. Arnold’s winning over Bustamante could be illustrated by this comic that stimpyismyname drew:

Bustamante is a jackass. If he was going to get elected governor, he would be a complete moron and absolutely nothing would change. He would also pamper to the illegal immigrants every freaking chance he got, since he seems to have been one at one time or something like that, since he says he’s so much like them and understands everything about them.

So, we’re just going to have to see how Arnold Schwarzenegger will be as a Californian governor.

But, seriously, how much cooler would it have been if we could get Gallagher to be the governor? 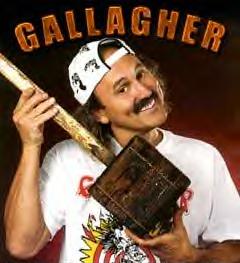