This story was started by Stussy4220, but finished by Holmes. 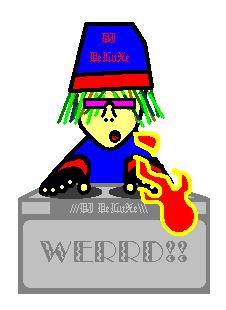 A long time ago in a land far, far away, there’s was little place called ‘Rappa’z D-lyte’ (pronounced rappas deelight). ‘Rappa’z D-lyte’ is a magical place where DJ’s, Pimps, Prostitutes, Dealers, and, of course, Rappaz live. Obviously, ‘Rappa’z D-lyte’ isn’t where all these people do their business, they go to New York to do that. Anyway, in ‘Rappa’z D-lyte’ there is a swell lil’ yungin named DJ DeLuXe. He’s only 13 years old, but that’s not young for someone in ‘Rappa’z D-lyte’. DJ DeLuXe is a struggling Disc Jockey. He can also freestyle sorta well. One day, DeLuXe decides to go to his DJ sesai for help in DJing because business hasn’t been going to well for our little hero.

So he hops on his moped and put-pudders away to Sesai’s Pagoda. About three hours later he finally makes it to Sensai’s

“Ahhh I’m finally here” says DeLuXe as he steps of his moped and puts the kickstand down. “Lets check to see what the Sensai has to sen-say!, ah-hahahahahahahaha, whooo, that was a good one!!” he says as he steps up the 400-step flight up to Sensai’s front door. Three hours later he makes it all the way to the top. “Ahh, made it” sighs DeLuXe. “Hey a note!” says DeLuXe as he walks up to the yellow Post-It Note “Hmm what’s it say?”

Gone for some yummy fried chicken, be back in 4 hours, 5 at the latest.

DeLuXe, angered that Sensai left, starts cursing freestyle…..style. He curses for like an hour, freestylin these swears until he starts rhyming fuck and cheese. How do you rhyme fuck and cheese? I don’t know but DeLuXe did it…must be spanish or something….anyways after he’s done cursing, Sensai appears from the mist behind DeLuXe.

“No young one…you don’t know the difference between an erection and rection. Here is an erection.” Sensai pulls down his pants as DeLuXe’s eyes pop out. “That is an erection.” says Sensai. “a RECTION is located here.” Sensai pokes the area where DeLuXe’s penis is located. “It is behind the bladder and above the brain but below the rectum…You have to reach deep inside to reach your inner rection.”

DeLuXe pulls out a tickle-me elmo doll. “I now understand the truness and obscene injustice of the rection…”

Sensai says: “Come with me son…come with on my motor water bed as you will see the world as I have…you will see as many rections as I have” and then he mutters “and erections…” Sensai hops on the bed (he is still naked) and he ties the bed around DeLuXe’s butt cheeks and makes him pull the bed. The bed has no wheels or anything.

Sensai then says: “Only after you have seen your inner rection, you can comply onto this journey to rappaz stardome. You will see the many pimps, prostitutes, and playas I have…Only after—”

DeLuXe interrupts: “Why do I have to fuckin pull”

Sensai: “Don’t interrupt young rection illitereate student, silence has now befalled your mind, body, rection and erection” They travel as far as ‘Playa’z D-lyte’ (now know as hawaii) without saying a word to each other. Sensai, still naked, stares off into the sun, burning his iris in his eyes. Suddenly, after going 4 months without saying a word, DeLuXe finally speaks. “Sensai…why is a rection so important?”

Sensai: “Well, my sensai son, one must truly suck on the rection to get the true ideas of what it is. I have sucked on my rection plenty of times and extracted the juices of knowledge and expierience…infact my rection is truly dried out…”

DeLuXe, holding back from laughing: “How do you suck on your own erection?”

Sensai: “Silly boy…sucking a dick is just nasty…I’m talking about a RECTION! A RECTION GOD DAMNIT! Pull into the nearest KFC before my rection bursts with anger.” They pull into the nearest KFC only to realize that they are early, infact, very early because the KFC branch hasn’t even opened yet and won’t open for about 20 years. They decide to set up camp and party all night long with other rappaz and playaz that they pick up. They freestyle the night away. Thats when they meet Dlick Zuka, a rapper from the North-South side. He was the quiet type, smoked marijuana a lot and ate at KFC even though it hasn’t opened yet. They all decide to embark on there journey to find there rections. Sensai then hooks up the bed to Dlick Zucka’s butt cheeks, and lets DeLuXe ride on the bed with him, naked and admiring there rections. They stop by the nearest 2dolla whore store and pick up a bunch of bitches.

DeLuXe, excited by picking up the bitches, then says: “we are gonna get laid tonight!” Unfortunatley the whores didn’t appreciate that and kicked DeLuXe’s ass and Sensai’s ass and they both got fucked by Dlick Zuka. Deciding they were fucked (well not really), they decide to embark on there journey with out Dlick. They ride for days on there waterbed, viewing the worlds great treasures. After being gone for 90 years, they come home to ‘Rappa’z D-lyte’. Unfortunatley the place has completely changed and it turned into a dork hangout called “Harvard.” They decide they’ll live in cardboard boxes outside the place.

One night, after a freezing day, DeLuXe asks his master: “Ok I thought I was going to be the best damn DJ on this side of the planet after I found my rection…”

Sensai sepnds 5 hours in deep thought then, finally, he answers the question: “No, bitch, dishwasher” He kicks DeLuXe out of the box and DeLuXe was forced to wander the streets. He heads to a bar and they ask him to freestyle on stage, he does and becomes popular in exactly 12 minutes. Yeah, it’s a world record. You don’t believe me? Read a dictionary…ok maybe it isn’t but whatever. He’s more popular then you. Anyways, Sensai never dies and is still that homeless bum outside of harvard talking about erections/rections and eating KFC chicken on his crappy waterbed. DeLuXe became king of the world and freestyle while he was trying to make world peace but he rhymed fuck and cheese and no one liked that so the world got into a terrible fight and everyone died except the person writing this story. Dlick Zuka was the gayest guy in this story so who cares. And they all lived happily ever after.