Posted on September 17, 2016 by davepoobond (DPB) Leave a comment 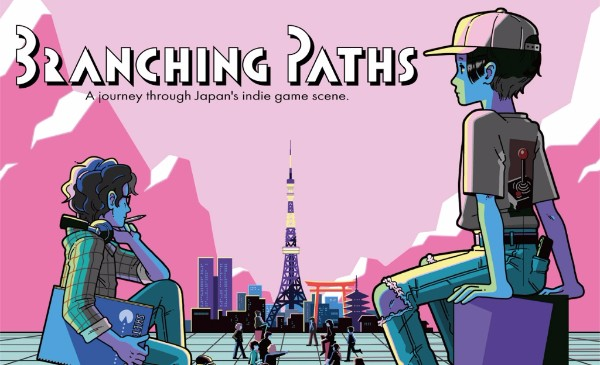 Branching Paths is a documentary that follows the director’s in-depth examination of the Japanese indie game scene.  Throughout the documentary, which spans over the course of 2013 to 2015, you’ll see just how diverse it really is; all sorts of different people are introduced in Branching Paths.  Of course most are of Japanese nationality, but there is a swath of internationalism that makes its way into the documentary, with westerners creating a foothold in Japan and becoming part of the diverse fabric that makes up the Japanese indie game scene.

The director takes a low-key narrating role when needed.  Much of the narrative is pushed by the interviews and text that pops up on the screen saying what event we are at and what the purpose of it is.  A series of indie game events occur in Japan during the time span of the documentary, and we revisit the same events in different years, which shows the subtle changes, recurring faces and recurring games to see their progress.  Games we are introduced to pop-up throughout the different events: Million Onion Hotel, Downwell, and TorqueL among others.

Much of the interviews focus on the culture and market of Japan as a whole and how North America is the biggest market for their indie games despite developing them in Japan.  Because the PC game market in Japan is so small, it is important for developers to make their games available on mobile or consoles, whereas to appeal to the North American market they almost always need to be on PC.  Many games are crowdsourced or find their success in the North American market before being able to become successful in Japan.  We also see the progression of the promotion of indie games by big publishers such as Sony and Microsoft, carving out spaces at the Tokyo Game Show, and creating an event just for indies in the form of BitSummit.

Interviews with higher profile Japanese indie developers such as Keiji Inafune of Mighty No. 9, Lucas Pope of Papers Please, Dylan Cuthbert of Pixel Junk (Q-Games), and IGA of Castlevania fame also make their way into the documentary.  It is interesting to learn a little bit about the similarities between indie developers no matter their origins.  There are many other lesser-known/locally known people who add to the composition of the documentary.  A segment of the documentary also explores the blurring of the lines between traditional “doujin” (self-published) media like comic books and the indie game market.

We don’t really get to know much about the director herself other than she was born in France, and grew up on Japanese games.  It would have been nice to learn a little more about the director during the first part of the movie, but it was obvious they didn’t want to lose focus from what the actual subject of the documentary was.  The director is possibly on screen one or two times but her personal journey feels more like a disembodied journey as a result.  She narrates two or three times and the last part of the documentary she doesn’t make any other narrations.  The quality of the cinematography is quite good, and I was only frazzled by a couple of weird shots they kept re-using, such as focusing in on a person’s top half of their head and not seeing their mouth, or people’s fingers.  B-roll like this probably could have been better replaced by more video about that developer’s game or something.

Another thing to note about Branching Paths, is that it is subtitled about 90% of the time.  The documentary is interestingly multilingual as you’ll see most interviews in Japanese, a few interviews in English, and the bits of narration done in French.  If you aren’t a fan of subtitles, it might not be for you, but you’d have to be gifted in language to enjoy this without subtitles.  It would have also been nice if the documentary spaced out interviews a bit at times so as to not have to read subtitles while also having to read titling about events/dates.

Branching Paths is an interesting look into a niche market in the overall gaming industry.  A lot of focus has been put on indie gaming and mobile gaming in the past few years, and focusing on this area is a unique subject.  Most of what is learned in this documentary may be more interesting for people who aren’t particularly sensitive to the nuances of gaming culture/markets, but even I learned a few things from this documentary.  It held my interest throughout and didn’t really drag at any point.  Branching Paths is available on Steam for $9.99.

A trailer for the documentary can be seen below: