Posted on December 10, 2012 by davepoobond (DPB) Leave a comment
This entry is part 10 of 13 in the series Dave's Breakdown

I found this ridiculously asinine list of apparent requirements that some random stupid girl threw up on her dating profile.  Since it was so terrible, I decided to break down each line of it.  It should be noted that this was found on a not-very-attractive “high skool” math teacher’s page.  I doubt she actually wrote it, but who knows with these things.

The original image is attached at the bottom of the post.

I want a boyfriend who:

Wow, how paranoid and/or low self-esteem do you have to be to actually put a stranglehold on whoever you consider to be your actual boyfriend to restrict them from ever calling another girl “cute.”  Wow.  CUTE is the barrier?  A 10 year old could be construed as “cute” — is this person going to become super jealous if that happens?  I assume the obvious point of stating this to begin with is that they don’t want their theoretical boyfriend to look at other girls, but the catch-all low-standard requirement just seems like a good way to be controlling of said boyfriend rather than being more afraid about having them, at worst, cheat on you.

Despite the terrible grammar, that this is #2 on the list absolutely boggles the mind.  Note that half of this world is made up of women, and most people in this world at least know one person that is a girl that they might be a Facebook friend with.  I would guess that simply being a Facebook friend with a girl is an infinitely more expressive notion to having some sort of infidelity going on with friends that are girls you might have, let alone liking some stupid fucking picture.  It’s okay to have cyber sex in private messages and talk about how many handjobs you would give in 30 minutes, but if you’re liking a photo, HOLY SHIT WATCH OUT, THE GIRLFRIEND IS GOING TO SMOTHER YOU WITH THAT PILLOW WHILE YOU SLEEP.

– “Would text me good morning/goodnight texts :)”

Boring.  Every single fucking day?  Come on.  Don’t people have different sleeping schedules, anyway?  I would assume that someone who is this controlling would want to be with their boyfriend 100% of the time anyway so wishing for these texts are irrelevant in their very basic logical form.

– “Actually makes an attempt to spend a day with me.”

I like that “makes an attempt” is the standard.  I guess it excuses anyone from actually having to spend a full day with this idiot.

– “Doesn’t want to rush things and isn’t just after sex.”

I already feel like this person wants to be married after the prior requirements.  Who’s the real person rushing things?

– “I can be my complete self around.”

Because there are apparently multiple “selves” running around separated and once they are completed they shall combine into the Slime Lord, a hopelessly clingy and needy ultimate biological girlfriend that you don’t want.  And Slime Lord is apparently in an “around” shape.  I guess.

– “I can take silly pictures with.”

Isn’t that cute.  WHOOPS!  Let’s just take some silly pictures, girlfriend!  It’ll be lots of fun!  Never mind having any sort of commonalities in our interests or personalities.  Just as long as we can take silly pictures, it’s good!

Despite the fact that Xbox sucks because you have to pay an additional fee to access any online fees, this girl probably only likes to play Call of Duty or at best Halo.  Considering the rest of the list leaves no room for imagination in perhaps other types of games that might actually be more complex than “shoot the bad guyz” I could see this as a string of very painful experiences.  Most of the pain would come from split-screen multiplayer.  Yuck.

Cuddling is less important than wrestling.

– “Respects me and my decisions.”

What this actually means is:  “Here’s my fucking list and if you don’t fucking like it you can go fuck yourself.”  I think I’d rather fuck myself, thank you very much!

Also, it might be a bit of irony that this is the last in her list.  I guess being able to wrestle and take silly pictures with someone is more important that having respect from a theoretical boyfriend. 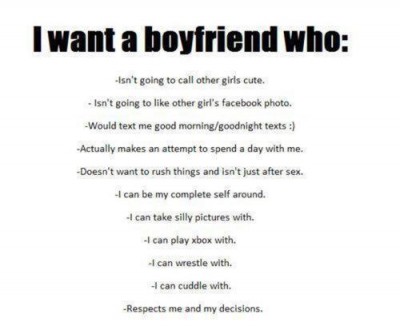