Posted on January 27, 2018 by Soup Tyrant Leave a comment

Often times, nostalgia is controlled by a brand. You get droves of village idiots bickering over Star Wars and the proper way to make a Zelda game. Sometimes, though, you can have a love letter written to you, signed by someone else. In a way, that’s the best way to sum up A Robot Named Fight! in a metaphor. 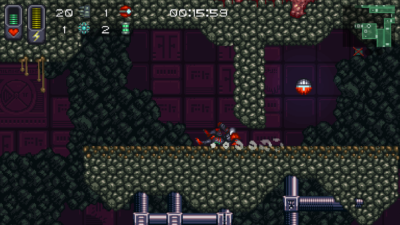 From the title sequence, to the voice over, A Robot Named Fight! tries really hard to evoke the same feelings Super Metroid first did. This didn’t necessarily put a good taste in my mouth. I prefer tapioca pudding. However, almost immediately it earned the right to try to tug at my nostalgia strings.

Most folks that know their way around video games have either heard of a “metroidvania,” or have personally played one, but for the sake of being a contained resource I’ll outline that now. A Robot Named Fight! is, at its core, the definition of what a metroidvania typically is: the player controls a character in a 2D-sidescrolling environment, exploring rooms and killing enemies as they collect power-ups, abilities and equipment. Some areas require particular abilities to traverse, or require specific pieces of equipment to get past, such as a door that requires a missile to open, or an area that requires fire-proof armor. Typically, one item will allow the player to backtrack and find another ability in an area that was previously inaccessible, often with the aid of a map in some form or another. Enemies and bosses tend to be common hurdles, but the environment itself often demands a particular level of platforming skill to get around. There are dozens of bread n’ butter titles for this genre, but they tend to share a common trait: the environments aren’t randomized in any manner. 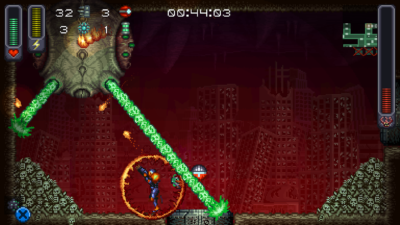 The twist for A Robot Named Fight! is that it’s a roguelike; the “item progression” and map itself is randomized whenever you start a new game, picking out from a pool of items you’ve unlocked from gameplay. Some runs you’ll have to get an upgrade to shoot switches through walls, other runs you’ll need to find their version of the morph ball, which happens to be a tiny spider, or rockets. You start out kind of slow and clunky, but most upgrades augment your walking speed, shooting and bullet speed and damage. In a sense, it’s a Super Metroid clone you can never memorize the map of. Runs, depending on completion of the map that spawns, take about an hour or less depending on the level of exploration, the items given to the player, and the enemies and bosses encountered.

The art style is an homage to titles of the 16-bit and 32-bit eras. The music and sound design is fitting, especially for the B-horror film plot line explored through the game (it’s very much a secondary aspect to the game, not that it’s a problem). There is very little A Robot Named Fight! does that I feel is underexplored or half-assed. The only thing I can even suggest is that I wish the map had colored doors for various progression blocks, but it’s a small grip considering the game’s content and obvious aims. There is little more you could ask for in terms an unofficial successor to Super Metroid.