Bill Gates farted in an apple store and stank up the entire place.  But it’s their own fault for not having windows.

Posted on September 3, 2013 by davepoobond (DPB) Leave a comment

Third party ownership is really annoying, I mean let’s take Crayola for instance.  They’re owned by Binney & Smith, which is owned by Hallmark.

It’s really stupid when you look at it.  But I guess we’ll have one thing to be looking forward to: Microsoft owning every company in every industry in the damn world, which means owning US, the government, and the world!  And then the bushes we squat by.  THen, the aliens will come and buy Microsoft which means buying the world, and all our Chipmunks compilation CDs (yes, even the Christmas ones).

Then people everyone hates, like Bill Gates, Rosie O’Donnel, Dennis Rodman, Jean Claude Van Damme, etc. will live forever just to spite us and make more reality TV shows such as Double Dare Extreme (where people use napalm instead of slime) and continuing Survivor forever.

And we can’t do anything because we don’t have any intergalactic space weapons or things that go “whoo whoo” to get rid of the aliens.

Then, the aliens make crop circles everywhere.  Even in our grass, our pretty flower fields, and our landfills.  I’m sorry, I’m getting out of hand.  Bye.

Bill Gates my father is not.

While copying them from a Macintosh to a PC, he had no idea the PC would automatically truncate the file names to ten characters, eliminate spaces, and replace apostrophes with periods.

10. A twinkie for everyone in the country.

9. Develop and market an action-figure doll of yourself.

8. Get yourself one a’ them “Pentagon quality” toilet bowls.

7. Buy the biggest trailer in West Virginia, and then put a new BMW on blocks in the front yard.

6. Pay for a top-notch therapist to deal with the feeling that, compared to Bill Gates, you’re still not rich.

5. At long last: a home-slurpee machine of your VERY OWN!

2. Get it all in pennies and ride the horse in front of K-mart, FOREVER!

1. Donate it to a college. Then they can name a building after you: “Lucky Bastard Hall”

Mr. P-yooson is a math teacher where davepoobond went to high school.

Mr. P-yooson is a big basketball fan of the Lakers, and never wears deodorant.  You can always smell him as he grinds his teeth and walks past you.  He may not acknowledge your existence as he walks past you, but its hard to not acknowledge his when he triggers more than just your sense of sight.

Mr. P-yooson’s nickname to some is “The Human Knife” and could very well pass off as a Bill Gates look-a-like.

When Bill Gates died, he went up to Heaven, where Saint Peter showed him to his house; a beautiful 20 room house, with grounds and a tennis court. Bill Gates was pleased, and spent many months enjoying the amenities of Heaven.

One day, he was enjoying one of Heaven’s many fine parks, when he ran into a man dressed in a fine tailored suit.

“Actually,” the man replied, “I was given a hundred of these when I got here. I’ve been treated really well. I got a mansion on a hill overlooking a beautiful hill, with a huge five-hundred acre estate, a golf course, and three Rolls Royces.”

“Were you a Pope, or a doctor healing the sick?” asked Gates.

“No,” said his new friend, “Actually, I was the captain of the Titanic.”

Hearing this made Gates so angry that he immediately stalked off to find St. Peter.

Cornering Peter, he told him about the man he had just met, saying, “How could you give me a paltry new house, while you’re showering new cars, a mansion, and fine suits on the Captain of the Titanic? I invented the Windows operating system! Why does he deserve better??!!!!”

“Yes, but we use Windows,” replied Peter, “and the Titanic only crashed once.”

Bill Gates was disappointed to hear how Princess Diana died…

Her crashes affect more people than his. 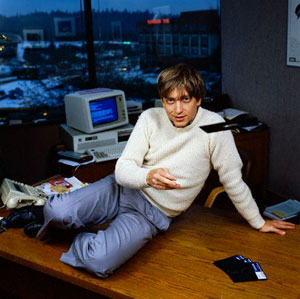