The Playstation 3 controller has changed quite a bit from its Dual Shock and Dual Shock 2 relatives. Whether or not its going to be called Dual Shockless (because of the lack of rumble) or end up being called the Dual Shock 3 (if by some miracle Sony puts rumble back into it), its got a few other changes to point out that are relatively for the better.

The form factor is quite literally the same as the Dual Shock 2, maybe changed a little to fit the palms easier, but all in all the same. It’s lighter, but still feels durable – maybe not as much as the Dual Shock 2, but that’s because of the weight that has been dropped between the two controllers. But this loss of rumble motor weight should help while using the motion sensing and battery life. Speaking of battery life, its supposed to last for about 24 hours on a single charge. The battery will be integrated into the controller, so that it won’t compromise the shape of the Dual Shock, though it probably would be a good idea to make it user replaceable. 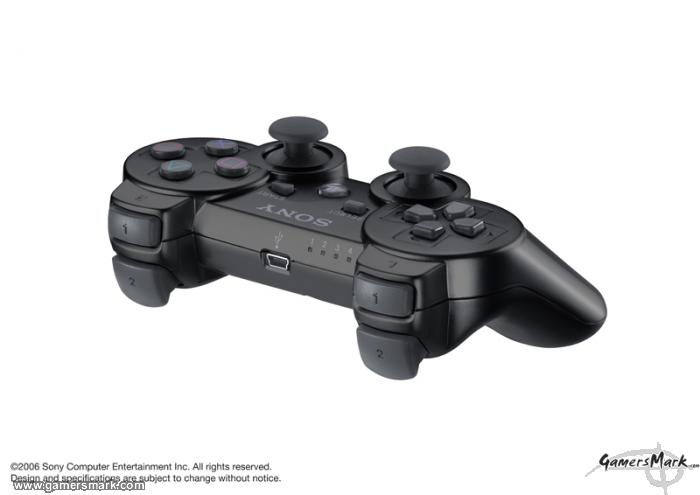 All the controllers at E3 were wired, so they obviously were not the final controllers since very controller is to be wireless by Bluetooth. There are four lights on the top part of the controller to indicate which controller is which. As of now, seven controllers are still supposed to be used, but the lack of three extra lights on the controller might be worrisome to a few people. It’s possible to show controllers over four by displaying two lights at the same time, for a total of seven combinations of lights up to two lights on at the same time. There is also a USB port on the top of the controller for the final version which will allow for charging, and who knows, maybe even attachments.
The analog sticks became more sensitive, increasing from 8 bit to 10 bit in resolution. The game that really showed off the enhancement to me was Mobile Suit Gundam, during the aiming of its machine gun. The analog sticks seem like they will be more apologetic towards FPS games than any other PlayStation controller before it, so some people will be happy about that. A “Home” or “Guide” button has been added to the middle with the PS logo on it. The “Analog” button is gone now, so you can always assume that analog is on. Though it was nice to know your controller was working by having that light, the new indicator lights will replace that use, I’m sure.

As far as I could tell, pressure sensitivity is still there in the buttons, as well as the L3 and R3 (clicking sticks) buttons. The only buttons that have really changed are the L2 and R2 buttons. They’re more like true analog triggers, while still keeping their traditional button feel. Some people say they feel a little “spongey,” but I didn’t get that feeling at all. It’ll just take a little getting used to how they work as opposed to the L2/R2 buttons on a Dual Shock 2.

Though no one had a chance to use the “boomerang” PS3 controller, going with the Dual Shock design again is a good and bad thing. It’s good because we know how it works and how it feels, but it’s also bad because it doesn’t really try to improve too much of the ergonomics of how it feels. Maybe the PS4 will see another design.