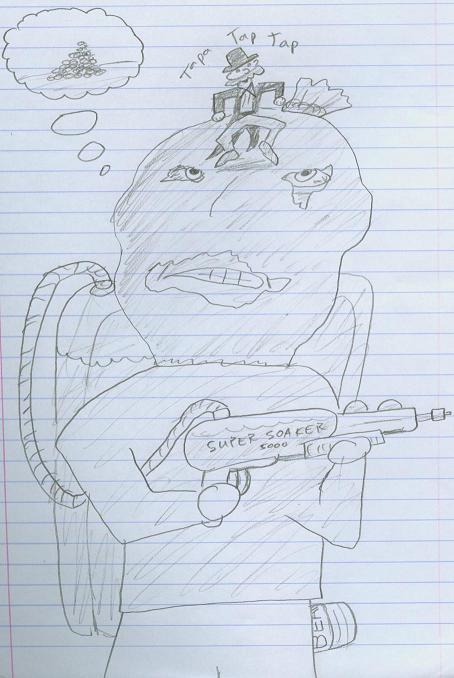 Sweat trickling down the side of his face, down his cheek and onto the side of his gun, Percy the Sniper’s hands were trembling as he pulled a black sweater mask thingy over his face as he took the gun out of its colorful case. “Stupid plastic binding thingys…” he muttered. You could hear his breathing through his ears, as his eyes narrowed and he pumped the gun 50 times, watching the gauge slowly climb.

“My efforts are worthless, now…” Percy the Sniper commented, with a very nervous feeling as he slung a 60 gallon tank over his back, almost dropping it because of the immense weight, filled with the stuff he would need to complete the mission.

All Percy the Sniper had was his gun, the 60 gallon tank and a can of beans, but something he didn’t know about the beans, was that they were alien beans, the one that makes you burp through your ears! But that’s enough about that…that’s a different story…

Percy the Sniper bent down and sat on the beans, and started to tremble uncontrollably as he swallowed the beans, through the out-door. What can I say? He’s a “special” child…

A cold shock hit Percy as he found out it was time to go forth with his mission. Looking through the poorly cut holes of his mask thingy, he saw there was a man tap-dancing on his forehead!!

This was a very odd sight indeed, and his mentor had told him, “One who will fail in his mission and stumble into a hill of beans, would see a figment of a man tap-dancing on his forehead, like straight out of Riverdance!”

Walking, very cautiously, around the urban scenery of the forest, he saw a hill of beans! That did it for Percy. He lowered his gun a few inches, just staring at the beans and remembering what people had told him about the mystical hill of beans…

While in the middle of another memory, Percy heard a crack and a rustle from a tree to the right, and right there, in purple clothes in a branch, was Herbert, the circus elephant!!

Just as Percy was about to run away, a large stream of water came down at him and hit his pants! “Oh boy, this is gonna be hard to explain to the guys at the party…” Percy thought, as he returned fire with an even larger stream of water, from the 3 nozzle Super Soaker, right back at the purple elephant.

The elephant lost his balance as the water struck him in the eye and fell down into the hill of beans, splattering everything around it, with the sick, syrupy, brown, stew thingy that usually comes with beans. Percy didn’t care anymore, he just kept pumping and shooting the water at anything that moved. Chester the Lion, Moo Moo the Cow, Bow Wow the Gorilla, and Suzy the Trapeze Tortoise, all fell to the water that had been barraged at them from the agitated one.

Suddenly, there was a flash of light! Someone took his picture? NO! It was the Aliens! THEY CAME BACK FOR HIM! “NOOOOOOO!!!” Percy screeched in a disturbing tone, as he dropped his water gun and fell to his knees shivering violently, gripping the sides of his head, as if his head was going to blow up.

All was white…so quiet…so bright…what a great rhyme…though its not that great…then, came into focus, was not trees, but a very bright light set straight at his eyes. A faint whisper had been noticed by his keen hearing, “Mr. Percy? Are you awake?” “No…” Percy replied, “I have my eyes open because I’m dead!” Percy had said in a very violent sarcastic remark.

Percy sat up, and looked around at where he was. “Actually, you are!” the whisper had said in a melodic tone. “WHAT?” Percy shrieked in a trembling voice. “What do you mean?”

Across the room, Percy saw 3 figures, covered in shadow. “Who….who are you?” Percy could barely get the words out, as he swallowed. “Why, we’re the Committee of Weird People You Thought Were Dead But Aren’t, but you should know that already!”

One of the shadows came over and turned off the light shining in his face, and in an instant he immediately recognized the 3 figures. From left to right, there was Kurt Kobain, Bob the Giant Squirrel, and Elvis Presley!

“AH!” Percy shrieked as he fell off the table backwards. Percy stood up and hid behind the table he was lying on before, and found that there were lots of chips, pork rinds, and old pizza.

Elvis scratched his hair, and said, “Yo, Percy, what’s wrong? I think that you need to lighten up on that old chocolate pizza we got in the freezer…” Elvis waved a finger at Percy, shaking his head.

Kurt nodded a little bit, “What? Oh…..yeah….sorry….” Percy had an astonished look on his face as he just screamed and slammed against a wall, to find that it was padded. “WHY ARE THERE PADDED WALLS HERE?!” Percy screamed. Elvis shrugged, and said “Well, that’s for Rumpus Time…don’t tell me your forgot THAT too!”

“I gotta get outta here…” Percy thought with a shaking fist, and he grew weak, and slumped down on the floor, and sort of bounced, because of the padding. “The padding…is so plush…” Percy thought as he passed out, thwarted.

One thought on “Sniper Problems…”