Posted on October 8, 2017 by Soup Tyrant Leave a comment 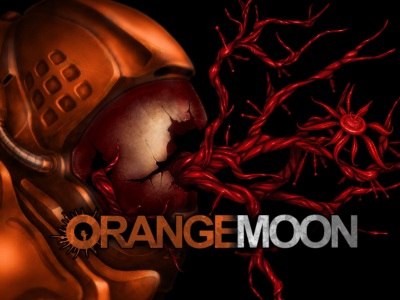 Often times, the best way to approach reviewing a game is based on how it is advertised, and Orange Moon is no exception. Here’s how Betelgeuse Zero describes their own game on Steam:

Orange Moon is a surreal 2D action-platformer with RPG elements and complex puzzles. Take on the role of an explorer as you discover the mysterious world of Orange Moon – filled with hostile native life forms and harsh, treacherous environments. To increase your chances of survival, choose from a variety of weapons, equipment, and upgrades to aid your dangerous exploration. Can you uncover all of Orange Moon’s secrets? 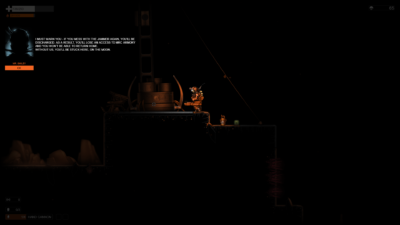 Oooh-eee! Sounds like a good time, huh? Some platforming, some complex puzzles… will I uncover all of Orange Moon’s secrets?

Yeah, very quickly, in fact. Under four hours, including an hour or so I spent with the game paused (which causes some weird bugs, so don’t do that).

Orange Moon is as described when it comes to genre: it’s a 2D platformer. Your character is sent to explore the game’s namesake on behalf of the Moon Resources Corporation in search of what clues of what happened, guided along by a Mr. Anderson. The story is sort of abrupt and rife with spelling and grammar errors, and ends up being somewhere along the lines of a porn’s story: it’s there just to explain why people are doing things in a particular place.

Players will walk a rather bland black and orange landscape whilst shooting at an inordinate amount of turrets, floating blobs and the occasional bipedal enemy whilst burning bushes to the ground and sucking the life out of the roots (literally) to sustain yourself. You walk, you shoot, you jump–standard fare in 2D platformer games. In addition to these, the player is able to use fuel to do rocket jumps in order to traverse the terrain.

The player unlocks a variety of weapons along the way, such as a shotgun and a minigun, all of which require ammo that can be found or purchased from an upgrade store using currency earned from killing enemies. If you’re short on cash and don’t have ammo, a flamethrower can be employed to kill foes using the player’s fuel reserves. Weapons and equipment can be upgraded with upgrade canisters that can be found or purchased. Upgrades include better damage on weapons, more health, larger fuel tank upgrades and the ability to use specific guns.

None of this sounds bad in practice, but none of this is executed in a satisfying way. Weapons that can be aimed aren’t very responsive to changes in aim, and the arc is limited. Most weapons require upgrades to be useful against many enemy types, and some weapons, like the flamethrower, are actually unable to do damage to most enemies even when upgraded. This leaves for some very heavy reliance on specific weapons to defeat some enemies, which isn’t a problem in itself aside from the fact that it means you’ve wasted upgrade points that could have been used on something worthwhile. 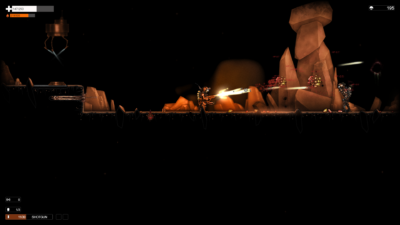 Fuel is tied to jumping, which means if you’re out or low you’ll spend a rather long amount of time waiting until you can climb out of a hole or make it through a jumping section, especially if you’re using the flamethrower a lot. This can be offset with upgrades, but the design isn’t really fun, it doesn’t add challenge, and it’s not interesting. Eventually, when upgraded, fuel is trivial and no longer serves a purpose, especially as the flamethrower becomes increasingly less useful. It just never seems to fit in with the rest of the game in a meaningful way that limits the player or forces choices outside of, “Do I want to wait a few minutes before I can climb out of this hole?”

Level design is simplistic at best, and the “complex puzzles” the developer touts as a feature are little more than a series of fetch quests that involve minimal amounts of backtracking. Exploration is also somewhat scant: secrets are usually as simple as falling down a hole, or taking a short detour. Considering the constant pallet of orange outlines on a black background, nothing is particularly interesting the entire journey, aside from the occasional scripted set piece.

While the game isn’t particularly bad, it’s nothing to write home about. It’s buggy, with the player character often getting stuck on flat terrain or getting stuck in a wall. It’s not particularly polished, with features such as the scouting probe being usable in situations that freeze the player character in the air, or mess up the camera afterward. The music’s not bad, but as a highlight it’s also nothing particularly special. Orange Moon is merely just a game that works when you boot it, and ends when you finish it, albeit with some performance problems (at least with an 3770K and a GTX 980ti). 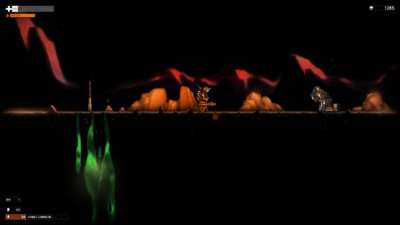 I think Orange Moon‘s most common problem is poor design. Enemies are not particularly difficult to deal with, often blocking a corridor perfectly with their height, acting almost as an aggressive door that needs to be unlocked with a shit load of ammo. Outside of the crappy turrets and plants all over the place, enemies tend to have a lot of hit points and armor that renders many guns useless without a lot of upgrades. All story is conveyed via text in the upper left corner of the screen, but when these kinds of events happen the entire screen darkens, aside from a small circle around your character, even if you’re in the middle of combat. Why do this? To force me to read this uninspiring story? Don’t interrupt the gameplay like that, man. That’s like the missus asking, “Are you done yet?” in the middle of “doin’ it”–it doesn’t really inspire enthusiasm, and it’s an extra unnecessary hurdle in trying to have some fuckin’ fun. Pile those two on top of my other complaints, and you don’t really have much of a reason to hang out in Orange Moon‘s world. Other games that are somewhat similar, even classics like Super Metroid accomplish the same thing without all the egregious errors.

There’s a lot to fix, but even if these things were fixed it wouldn’t be particularly compelling considering many of the design choices.