It’s a Monday night, and I’ve got my Vive on my hip; Soup Tyrant is on the prowl! Reeoww!

“As an outcast-scientist-turned-mutated-monster, seek vengeance against those who rejected your research! In Mighty Monster Mayhem, you can tear down buildings, make entire cities crumble, and munch on unsuspecting pedestrians. Choose from a variety of creatures, and battle with (or against) friends, wreaking havoc in multiple campaign modes – unleashing fury on everything to increase your score! How much mayhem can you cause?” 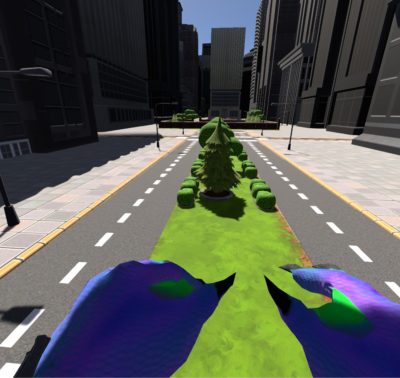 First thing’s first: the unskippable tutorial. You’re not allowed to play the main game or multiplayer without being a big boy and/or girl and playing along with the voiceover’s lesson plan, so I figured I’ll just jump through the hoop. I appear to be a big fishy monster with a big ass watch on my left arm. It’s not super clear from the narration, but from the store page description you can piece together that this annoying dude in your ear is yourself. They teach you how to walk, and then explain some basic monster techniques at your disposal: punching, grabbing, throwing, climbing and jumping.

The controls aren’t bad in theory. The locomotion alone is kind of neat. Locomotion is activated by squeezing either controller’s grip button and then swinging your arms. The rate that you swing dictates the rate that you move, from a tiptoe to a sprint. It works pretty well, and it’s one of the better thought-out aspects of the game.

Punching is what you think it is. You ball up your first by holding the trigger on the controller, and then swing around to punch. Swinging your arm around without holding down the trigger doesn’t do dick, so swatting things doesn’t seem to be an option. Grabbing things is done by moving your hand close to something and holding the trigger down. You can grab a bunch of things, but what I’ve found is that if you grab things that are too close together, you destroy the thing you’re holding along with whatever you’ve “collided” with that was next to it. If you’ve managed to pick something up, congrats: you can now throw it at something by doing a throwing motion and releasing the trigger. Throwing has weird physics to it. Either something flies off into the horizon, like shitty Pokemon villains, or it flops a few feet ahead of you straight into the dirt, like my hopes and dreams do. It’s also your only ranged attack. More on that in a bit.

Now for the weirder things. For climbing, you grab a part of a building and pull yourself up, repeating the process with your other arm. Moving around the building isn’t very difficult, but doing things on the building is kind of annoying. Punching the building requires you to move your hand far enough away from the building that you don’t grab it. Otherwise, you can grab and twist the part you’ve grabbed to rip it off, which sometimes happens unintentionally when you’re climbing frantically. Jumping rounds off your skillset, which you control by holding both triggers down, raising your hands in the air, and then throwing your hands toward your feet while releasing the triggers. Jumps are, for the most part, uncontrollable catapults into the air. You can control direction and power, sort of, but most of the time I felt like a fly without wings. There is no method of controlling your descent, so often times you will just have to hope shit works out.

Monsters can interact with the environment, picking up people (and eating them for one hit point), cars, you name it. Most things you can pick up, most things you can smash. Most of them share use, though; you either want to break something, or throw it at a building or enemy. Nothing you can pick up is functionally different from anything else, aside from humans, which you can eat, and powerups, which are used rather than grabbed and thrown.

There are a few monsters in the game, but the change is cosmetic as no monster has a unique ability or function. I unlocked “Toni the Oni” twice in two different levels. I’m not sure why I did, but when I used Toni, the change was of no real significance, at least none that I could find or had any explanation. I’m sure this is more geared toward multiplayer, as the game does offer drop in/drop out four player coop. 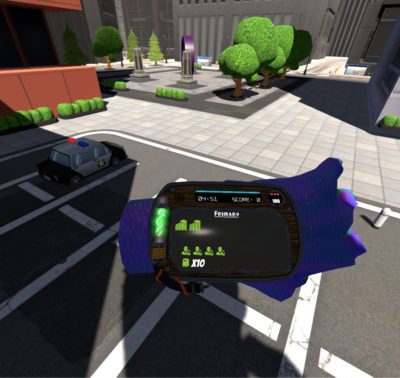 “My fitbit says I’m behind on smashing. Excuse me, officer.”

The meat of the game, single player or otherwise, is in a quasi free roam environment. The player’s goal is to look at your watch and figure out how many buildings you have to smash. There’s some side objectives, too, like eating scientists, smashing mailboxes and some other dumb shit, but it only seemed to add to score and ended up being more trouble than it was worth. Buildings are felled by doing damage to them, but for some fucking reason the way you take down a building is via “structural supports”, which are random, unmarked bits of building that have to be destroyed to take the building out. The only way to see them is with a powerup called “x-ray”, which outlines them in red. It ends up being more like a game of “needle in the haystack” once you get to later levels, since players have to take out about 6 or so buildings before the level’s finished. Building chunks are huge, by the way. It’s like the pentagon built all these fucking things. Each building is layered with several feet of concrete, to the point where pulling out chunks obstructs your vision and clutters the damn place.

As the player ruins the city’s shit, things change a bit. At first the city is a vibrant environment, with like 5 guys walking around and a few dozen parked cars, but when players start breaking shit it goes into chaos, with up to 5 guys walking around, some of them soldiers! Soldiers shoot these slow blue shots at you as they clip through buildings out of view, or into the assload of debris on the ground that doesn’t disappear. Out of sight, out of mind, right? Nah, they fire through buildings and debris. If players take out a building or two, they start sending these fucking weird looking cars at you. They have a few miniguns on them and rocket launchers, but only shoot the same blue bullets the little soldiers fire out of the middle of their hoods, rotating perfectly with you as you move around them. This makes more sense with the treaded tanks that come later, but cars? C’mon. It’s not like there’s a lot of detail in anything else. Could it have killed them to at least have the projectiles come out of the guns?

So, on top of all this, the game doesn’t run particularly well. The recommended specs for this game are at (unspecified) i5 and a GTX 980 or better. Even on superior hardware, this game has a bunch of issues rendering buildings without chugging. This is problematic, as it seems some physics and most player movement is tied to it. It becomes harder to eat people or pick them up. Throwing things is a crapshoot. Jumping becomes hopping. It’s just not a very pretty or busy game to be having these many problems.

Mighty Monster Mayhem is still indeed playable, but it’s a frustrating experience that can’t be carried by its novel approach to player locomotion. The game suffers from such a textbook case of, “great idea, terrible execution,” that it would make No Man’s Sky blush. It feels like Early Access, even though it isn’t. It feels like a tech demo, and with a heapin’ helpin’ of polish and some expansion of the “break buildings to win” formula, it could be a great game. Mighty Monster Mayhem may truly, one day, be the VR monster game to beat, the benchmark, defacto “you are a giant monster” game.