Posted on October 7, 2007 by The Typical Aussie Bloke 44 Comments 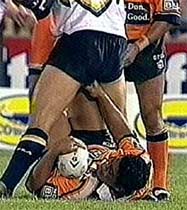 – A badger is in your pants. Those mofo’s have sharp claws.

– On stage naked when you have to urinate. People could lose their careers this way.

– Having a pencil up your ass

– Standing in a pile of hippo crap. You’ve seen how much they eat. Can you imagine standing in the crap of an animal who eats aobut 400 pounds of food a day.

– If you’re a guy. Never walk into a gay bar with no pants. Some people don’t wait until they get home.

– Don’t wear butt tight pants when you go to the beach. When you have a stiffy, people are gonna know.

– Making love to a gorilla. Some of those animls weigh 2000 pounds.

– Doing doggy style to a dog. Think where that thing has been.

– Drinking Coca-Cola in a Pepsi plant…HOW COULD YOU!

By The typical Aussie bloke:

– Taking a shit in a really old outback dunnycan that hasn’t been washed in 50 years. Imagine all the crabs on the dunny seat and the crusty shit stains ewwwwwww!!!

– Being tackled by John Hopoate during a Rugby League footy match. You know what John (BROWN FINGERS) Hopoate likes to do to footy players on the opposite team, especially when they are wearing really stubby footy shorts!

– Being a beer swilling yobbo at a local pub that has no beer. Yobbos can’t survive without beer!

– Thrown in a prison cell with nothing but a “Richie Benaud’s Autobiography” book. Now THAT’s boring!

– Being a little Aussie kid chanting “USA! USA! USA!” at the Melborune AFL Aussie Rules footy match. I guess the kid has been watching too much Simpsons episodes and doesn’t know that the Australian chant is “Aussie Aussie Aussie!!! Oi Oi Oi!!!”

– Some bastard pulling a prank on you by putting dark gooey shit to an empty Vegemite jar and passing it off to you as Vegemite. When you spread it on toast and eat it you’ll be chucking up in the dunny.

– Being the janitor cleaning a passenger jet after a shitfaced footy team has been on it. When a footy team gets pissed on a few slabs of VB, they will not care where they decide to hang a piss so there will be urine flowing down the aisle of the plane.

– Getting smacked hard in the K-nackers with a cricket ball when playing cricket with your mates. OWWWWWWWLLLLLLLLL that would hurt!!!!! Cricket balls are SOOOOOOOO HARD!!!!!

– Having a wedgy up your bumcrack while you’re in the bloke’s change room. All the blokes would think you’re wearing a G-string.

– Some bugger filling the tray of your Holden Kingswood ute with polyfiller. You won’t be able to transport any beer slabs or your pisstank yobbo pub mates around.

hopoate – v. to jam your fingers up someone’s arse. I made this word up after Aussie Rugby player John Hopoate jammed his fingers up the arses of footballers.

Ex. Oh my god, that guy got hopoated by some sick freak!!!

brown fingers – n. someone who sticks their fingers up peoples arses.

Ex. Doctors who specialize in the bowel area, or sickos like rugby player John Hopoate.